Cross-border investigation under way as focus turns to security ‘lapses’ 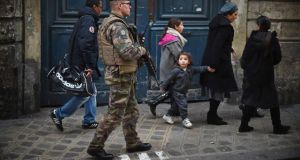 As France projected defiance and national solidarity after its worst terrorist attacks in decades, about 15,000 security personnel were deployed across France to guard schools, train stations and cultural sites.

French defence minister Jean-Yves Le Drian said 10,000 troops would be in place on the streets from this evening, with an additional 4,700 police officers deployed to 717 Jewish schools and religious sites.

Alongside that operation, the security services began what will be a painstaking investigation into the atrocities and those who carried them out.

The inquiry, which involves hundreds of police and intelligence officers from three arms of the French security services, is piecing together the movements of three Islamist radicals, their associates and a network of relationships linking the French capital to Syria, Yemen and Iraq. A key question is how the attackers, despite having been well known to the police, succeeded in planning and executing the killings undetected.

Chérif Kouachi (32), who with his brother Saïd killed 12 journalists and policemen at Charlie Hebdo’s offices last Wednesday before being shot dead by police after a siege two days later, was given an 18-month suspended sentence in 2008 for his role in the Paris-based “Buttes Chaumont” network, which helped send would-be jihadis to join Al-Qaeda in Iraq in the mid-2000s. Saïd (34) appears to have drawn less attention to himself, but Yemeni, French and US reports say he made several visits to Yemen between 2009 and 2012, when he is thought to have received firearms training. Both men’s names featured on an American “no-fly” list.

French police also had a detailed file on Amedy Coulibaly, who killed a policewoman in Montrouge, in southern Paris, last Thursday before taking 17 hostages at a kosher supermarket in the east of the city on Friday. Coulibaly and four hostages were killed.

While in pretrial detention for his part in the “Buttes Chaumont” network, named after the Paris park where members jogged, Chérif Kouachi met Beghal, who became a mentor to him, according to media reports in France.

The two remained in contact: after Beghal’s release into a form of house arrest in 2010, the pair met and allegedly discussed a plan to break out of prison the man who masterminded a bombing at a train station in Paris in 1995, which injured 30 people.

Coulibaly also met Beghal in prison and became an admirer. A set of photographs show the two men apparently involved in weapons training in a forest. With them is a woman said to be Coulibaly’s partner Hayat Boumeddiene, dressed in a chador and wielding a cross-bow.

In 2010, when police learned about the prison breakout plan, they moved in. Coulibaly was jailed for five years but Kouachi was freed for lack of evidence.

Coulibaly was released in March 2014, but because his convictions didn’t relate to terrorism, Le Monde reported, his name was not added to intelligence files on religious extremists.

In a seven-minute video posted online on Saturday, Coulibaly said he and the brothers “synchronised” the atrocities. Speaking calmly and looking directly at the camera, he said: “We did things a little bit together, a little bit separately, to have more impact, you know… We managed to *synchronise to come out at the same time.” In the video, Coulibaly says he was acting on behalf of the Islamic State.

The video lent weight to the theory that he must have had help. Before Coulibaly’s face appears, the viewer is shown text that refers to an attack at Porte de Vincennes in which Coulibaly took “17 hostages in a Jewish deli and executed five Jews”. Hostages told Libération that Coulibaly wore a GoPro camera; a similar camera was found in a Citroen car abandoned in haste by the Kouachi brothers as they made their getaway.

The video also claims Coulibaly put an explosive charge on a car which detonated on a Paris street; police are investigating whether this is linked to a device that was placed on the back tyre of a car parked in Villejuif, a Paris suburb. Nobody was injured when it detonated last Thursday at 8.45pm.

The inquiry will seek to establish the nature of any contact between Coulibaly and Islamic State, and between the Kouachi brothers and Al-Qaeda in Yemen, on whose behalf they claimed to act. It must also look into how the attackers managed to procure kalashnikovs, explosives and other weaponry.

But some of the most important, and politically sensitive, questions facing investigators concern security “lapses” already acknowledged in general terms by prime minister Manuel Valls.

Phone surveillance by the French domestic security service DGSI was lifted from Chérif Kouachi at the end of 2013, and from Saïd in summer 2014, according to Libération. “Wiretap warrants were not renewed because there were other priorities and Chérif, at that time, seemed to be moving in the direction of peddling fake goods. He wasn’t really in touch with the most dangerous people in radical Islamic circles,” a French government source told Libération.

Another source told Le Monde the intelligence service’s records were inadequate and out of date. The paper said the address police had for Coulibaly was one where his partner lived more than two years ago, while the address on record for one of the Kouachi brothers was in fact the home of someone who shared his name.