Croatia set for fierce election scrap in shadow of coronavirus 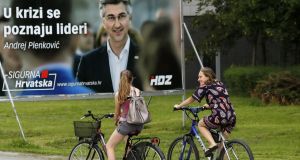 Cyclists in front an election poster of Croatian prime minister Andrej Plenkovic. He has been accused of endangering public health by calling the election during a pandemic. Photograph: Antonio Bat/EPA

Croatia’s two main parties are neck-and-neck in polls before Sunday’s parliamentary election, which will be dominated by concerns over coronavirus and its impact on an economy that relies heavily on tourism.

Surveys give both the ruling conservative Croatian Democratic Union (HDZ) and the Restart alliance led by the centre-left Social Democrats (SDP) between 25-30 per cent, well clear of the nationalist Homeland Movement that could be a kingmaker for the new government.

Prime minister Andrej Plenkovic (50) hailed Croatia’s reopening to holidaymakers last month as evidence of the HDZ government’s competent handling of the coronavirus outbreak, and a positive sign for a country where the travel industry accounts for about a fifth of gross domestic product.

A subsequent spike in infections has fuelled fears of a resurgence, however, and on Friday the country of 4.2 million people reported 96 new cases of the disease – equalling the record daily rise of April 1st. Officials say 3,008 people in Croatia have now been confirmed with the virus, 112 of whom have died.

SDP leader Davor Bernardic (40) has accused Mr Plenkovic of endangering public health by calling the election during a pandemic. The prime minister has also faced criticism for refusing to self-isolate after meeting Novak Djokovic at an ill-fated tournament organised by the Serbian tennis star on the Croatian coast, after which he and several other players tested positive for the virus.

Mr Plenkovic says he has tested negative several times, and argues that Mr Bernardic does not have the experience to guide Croatia through such a difficult period.

“This is not the time for political charlatanry . . . nor for those who are inexperienced and whose programme is a kind of wish list, without any real budgetary or political basis for implementing it,” he said.

“Right now we have a slightly increased number of infections but, like elsewhere in the world, in the time ahead we will need to balance between protecting public health and maintaining the economy and tourism.”

Neither main party is expected to secure a majority, and they rule out forming a “grand coalition” together.

Mr Bernardic, who says his government would focus on fighting corruption, modernising and streamlining the economy and reforming healthcare, accuses the HDZ of being mired in corruption and quietly planning to join forces with the far-right Homeland movement of folk singer Miroslav Skoro.

Homeland is expected to take about 11 per cent of votes, and claims to be the only real alternative to a political establishment long dominated by the HDZ and SDP.

Analysts say the HDZ’s traditionally strong nationalist following is not enamoured of the centrist Mr Plenkovic and may vote instead for the populist Mr Skoro, potentially paving the way for a coalition deal that would ring alarm bells among liberals at home and abroad.

Main points: What restrictions have been imposed on Kildare, Offaly and Laois?