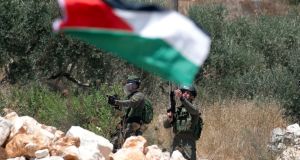 Palestinian protesters (unseen) fly a giant national flag in front of Israeli troops during a demonstration in the village of Kfar Qaddum in the occupied West Bank. Photograph: Jaafar Ashtiyeh/AFP

Ahead of the deal’s announcement, Palestinian president Mahmoud Abbas welcomed the effort to secure national unity, although it could mean a return to violent resistance, which he renounced on taking office in 2005.

At a virtual joint press conference, Ramallah-based secretary-general of Fatah’s central committee Jibril Rajoub expressed the rivals’ determination to “speak in a single voice”, stage “popular resistance in which everyone participates”, and to “put in place all necessary measures to endure national unity” in the campaign against Israel’s planned annexation of 30 per cent of the West Bank, which has been given the green light by the US.

Speaking from exile in Beirut, Hamas’s West Bank leader Saleh al-Arouri said: “All the controversial issues on which we differ, we will set those aside . . . We and Fatah and all the Palestinian factions are facing an existential threat, and we must work together.”

Hamas, he said, would use all forms of struggle and resistance against the annexation project. Every Palestinian “is a soldier in this work, each in his own way, whether a journalist, a politician, a diplomat, or an infantryman”. A founding commander of Hamas’s military wing, Mr Arouri has a $5 million US bounty on his head for allegedly organising attacks on Israelis in the West Bank.

Suggesting that for Fatah the time for peaceful co-existence had passed, Mr Rajoub, a long-standing militant, said: “We will not raise a white flag, we will not give up. All the options are open if the Israelis start the annexation and slam the door on the two-state solution.”

He said the form of “popular resistance” adopted would depend on Israel. “Intifada [uprising] for us is a means, the goal is to end the occupation, to end and remove annexation from the table.”

Since Mr Abbas has suspended security co-operation with Israel, this deal could mean that Fatah, Hamas and other militants will no longer be reined in by Palestinian intelligence and police agencies.

If implemented, the agreement could be a major turning point. The rift between Fatah and Hamas began with the 2006 election when Hamas won the majority of seats in the Palestinian legislative council, and it intensified when in mid-2007 Hamas seized power in Gaza. Since then there have been numerous short-lived attempts to end the division.

The Fatah-Hamas deal coincides with a rise in Covid-19 cases in the West Bank. As infections soared to 3,000, the Palestinian government imposed a five-day lockdown.

The rise is blamed on Palestinians working in Israel and contact with Palestinian citizens of Israel, where cases have risen sharply to 27,700.