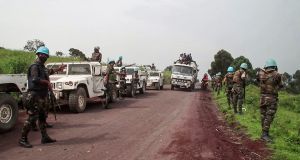 In an image from video, United Nations peacekeepers guard the area where the UN convoy was attacked in eastern DRC. Photograph: Justin Kabumba/AP

The Democratic Republic of the Congo’s foreign minister has promised her government will do “everything in its power” to find out who is behind the murder of Italian ambassador Luca Attanasio, who died during an attack on a UN convoy on Monday.

Marie Tumba Nzeza called the murder “despicable”, extending condolences to his family and the Italian people.

Military policeman Vittorio Iacovacci and a still unnamed driver working for the World Food Programme (WFP) were also reportedly among the victims in eastern DRC.

In a statement, WFP, the UN humanitarian agency which won the Nobel Peace Prize last year, said the delegation had been travelling to visit a school feeding programme in Rutshuru when the attack took place. Rutshuru is 68km north of regional capital Goma, which is on the Rwandan border.

The road had previously been cleared for travel without security escorts, WFP said, and the agency is now looking for further information from local authorities to explain what went wrong.

A representative for Virunga National Park told Reuters news agency that the attack happened at about 10.15am, and was thought to be an attempted kidnapping.

Italy’s foreign ministry confirmed the news “with deep sorrow”, and said the ambassador had been travelling in a convoy with Monusco, the United Nations Organisation Stabilisation Mission in the DRC.

“We would like to express sincere condolences for the tragic loss of our Italian colleague Ambassador Luca Attanasio and a Carabiniere in Congo this morning,” tweeted Ireland’s embassy in Rome. “Our thoughts are with their families, and in full solidarity with Italy as a partner in UN peace-keeping operations.”

Former British ambassador to the DRC John Murton also expressed condolences, saying his friend’s death was “a sobering reminder of how precious life is”.

Mineral-rich DRC has experienced decades of conflict, and dozens of armed groups are active in the east of the country, including the Allied Democratic Forces (ADF), an Islamic militant group with an affiliation to Islamic State.

The ADF stands accused of killing more than 1,000 civilians in recent years. Last June, its fighters killed an Indonesian peacekeeper near the town of Beni.

In March 2017, two UN investigators – Zaida Catalán, from Sweden, and Michael Sharp, a US citizen – were among a group killed by another militia near Bunkonde in Kasai Central province, while investigating human rights abuses.

The following year, two British tourists were abducted and held for two days close to where Monday’s attack happened, while a ranger travelling with them, Rachel Makissa Baraka, was killed.

On Friday, the UN Children’s Agency (Unicef) said there are 5.2 million displaced people in the DRC, 50 per cent of whom have been displaced in the last year. More than 3 million of them are children. Only Syria has more displaced, it said.