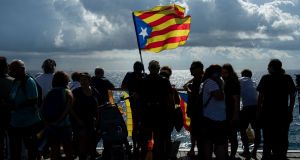 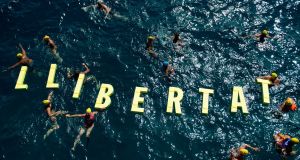 People swim around floating letters forming the word “Freedom” in Catalan during a pro-independence gathering in Badalona, close to Barcelona. Photograph: Josep Lago/AFP

It has become as much a part of early autumn in Catalonia as falling leaves and children going back to school. Every September 11th, hundreds of thousands of Catalans take to the streets to mark their national day, la Diada.

In recent years, the Diada has been dominated by Catalans who want independence for their region. The estelada, the red-and-yellow-striped flag with a white star that symbolises secessionism, fills Barcelona and other towns and cities as participants stage elaborately choreographed demonstrations aimed at drawing the world’s attention to their cause.

The massive participation and peaceful nature of the event are reminders of the visibility and resolve of the independence movement and this year demonstrators will again fill Barcelona’s streets.

However, unity, once one of the movement’s greatest strengths, is being tested now more th an at any time since these demonstrations became part of the political calendar, in 2012.

“Without strategic unity we cannot advance towards implementing the republic,” read a recent statement by the Council for the Republic, the entity set up by self-exiled former Catalan president Carles Puigdemont with which he seeks to promote independence from his base in Belgium.

It was tacit acknowledgement of the divisions that have plagued the independence camp, which include simmering tensions between Puigdemont’s conservative Together for Catalonia (JxCat) and the Catalan Republican Left (ERC), which govern the region in coalition.

Traditionally, ERC has been the more stridently secessionist party of the two. However, since the chaotic events of October 2017, when direct rule from Madrid was introduced after the Catalan parliament declared independence, the leftist party has taken the more moderate line. ERC, whose leader Oriol Junqueras is in jail, has said it is willing to offer support to Socialist Pedro Sánchez as he attempts to form a new Spanish government, something JxCat seems to rule out.

“[ERC] are starting to embrace realpolitik, even though they do not rule out a unilateral approach in the future,” noted Lola García, a journalist and author of a book on the recent Catalan crisis.

She explained that Puigdemont, who is seen as wielding a heavy influence on current Catalan president Quim Torra, is convinced that the pro-independence outrage that drove the events of two years ago could easily be stoked again. By contrast, Junqueras and many in ERC see signs of exhaustion among Catalans, “not with the objective of independence or the need for a vote on it, but rather exhaustion as a side-effect of exclusive dedication to that goal”.

The two parties also fail to agree on when new Catalan elections should be called. ERC, riding high in polls, would like an election this autumn whereas JxCat is less bullish.

A video recorded in Geneva by Puigdemont and ERC’s Marta Rovira, who also fled Spain in the wake of 2017’s referendum, has sought to restore a sense of unity between the parties. Both politicians called on Catalans to take part in the upcoming Diada.

“Things are better, there’s a better climate of co-operation,” said a source close to JxCat.

A more sudden, and perhaps surprising, schism has opened up between the pro-independence political parties, on one hand, and grassroots organisations, on the other.

The Catalan National Assembly (ANC) and Òmnium Cultural rank-and-file associations have been crucial in mobilising secessionist support. However, activists appear to be frustrated at the approach of the Catalan government and parties to the independence issue since 2017.

In June, a popular legislative initiative presented by grassroots activists urged the Catalan parliament to issue a new unilateral declaration of independence. ERC was again the voice of moderation, blocking the move, but the episode reflected a climate of mistrust between more radical pro-independence voters and their political representatives.

David Fernàndez, a member of the ANC’s national executive, describes his organisation as “the light that guides” the movement and he acknowledges that strategic differences exist between it and the political class.

“There are parties which have decided to go a bit slower or to put the brakes on,” he told The Irish Times. “We don’t have those doubts and we want to accelerate [towards independence].”

Over the summer, the discrepancy spilled over into the public sphere as congressman Joan Tardà was one of several ERC politicians who engaged in a war of words with the ANC. Tardà, who has argued for the independence movement to broaden its appeal beyond the large minority support it currently has in Catalonia, accused the ANC of “perverting the transparent will of the independence cause to be flexible and open”.

Meanwhile, it was reported that members of the radical pro-independence Committees for the Defence of the Republic (CDR) had left rubbish and excrement outside offices of ERC and JxCat.

In defending his party, the Catalan foreign minister, Alfred Bosch, of ERC, told The Irish Times that “what happened in October 2017 cannot be repeated”.

The Diada will be the prelude to what is likely to be an autumn of turmoil in Catalonia. The supreme court’s verdict in the case against 12 independence leaders – nine of whom are in jail, accused of rebellion – is due and the Catalan government, ERC, JxCat and grassroots movements are all deciding how to react to an adverse ruling.

That response will make clear whether or not they have resolved their differences.