Europe Letter: Square named after radical PM of independent Congo who was executed 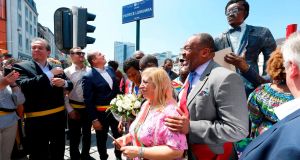 “You killed Lumumba,” she roared at the Belgian officials on the platform, before being escorted away by the police. The music and speeches resumed.

She was right: they did. Belgium was heavily implicated in the 1961 killing of the radical, first prime minister of an independent Congo, now the war-torn Democratic Republic of Congo. In 1975 a US inquiry also pointed conclusively to CIA involvement in the execution carried out by a Katangan police unit under a Belgian officer.

Until independence, Congo had been a vast, profitable colony subject to a brutal history of Belgian rule, notably under King Leopold II in the late 19th century. It is an uncomfortable history that many Belgians – their families implicated in the colony’s administration and military rule – still find difficult to face up to.

Historians estimate that up to five million died, roughly a third of the country’s population, and the Congo Free State’s vast mineral wealth was plundered, much for the personal enrichment of Leopold.

But Brussels was trying on Saturday to make amends to its large Congolese expatriate community by renaming a square after Patrice Lumumba.

In 2002, Belgium as good as admitted its part in the coup that overthrew him, as well as his killing. Foreign minister Louis Michel accepted a committee of inquiry’s finding that although the state itself had not sought his death, “some members of the then-government and some Belgian figures of the time irrefutably played a part in the events that led to the death of Patrice Lumumba”.

The commune of the city of Brussels had decided unanimously, following a 10-year campaign by Congolese residents and despite opposition in neighbouring Ixelles, that the time had come to face up to the unpalatable truth and to apologise.

And so the Square du Bastion next to the Matonge neighbourhood, home to a large Congolese diaspora – some 80,000-strong in this country – got a name-change 58 years to the day after Lumumba declared his country’s independence.

The occasion was celebrated by some 350 locals, Congolese music, dance and the inevitable speeches. “Today, by inaugurating this square, we forget nothing,” Philippe Close, the mayor of Brussels, said. “Today, in the heart of the Belgian capital, capital of 500 million Europeans, by inaugurating this Patrice Lumumba Square, we begin to write our common history.”

The idealistic and charismatic autodidact who became an international symbol of the fight for Africa’s independence from colonialism was born as Elias Okitasombo on July 2nd, 1925, in Onalua, a village in East Kasai.

He grew up to found and shape a political party that led the fight for independence, which the Belgians reluctantly conceded in 1958. Two years later, following a decisive win for Lumumba’s Congolese National Movement in the country’s first democratic elections, he found himself elected as prime minister.

He only ruled for four months. Then, after a military coup, the 36 year old was ousted by troops loyal to head of the army, Joseph Mobutu, who later spent 30 years as a corrupt and brutal president. Lumumba was confined, and then taken to the secessionist province of Katanga, where he was tortured and executed by firing squad.

Belgo-Katangan police commander Gerard Soete and his brother then hacked up what was left of Lumumba and dissolved the pieces in sulphuric acid, saving a couple of teeth for souvenirs, which, much later, were flashed, with an admission of responsibility, at a BBC film crew.

Although feared by the US and western allies for alleged communist sympathies, Lumumba’s politics were nationalist and pan-Africanist. He found in the Soviet Union, however, an important lone ally in the struggle for independence.

He was an advocate for non-alignment and a passionate believer in Congolese unity, opposing the country’s deep ethnic divisions. And he fought the Katangese secessionists who were supported by Belgium primarily out of interest in the region’s rich mineral deposits and fears that an independent would wrest back control of those resources.

Lumumba remains an iconic figure for many of his compatriots and today’s African nationalists, a symbol of the sacrifices made for freedom and of the treachery of the colonial powers. That his legacy is claimed – or expropriated – by friend and foe alike is testimony to his importance.

Close to the end, in 1960, he wrote eloquently in a letter from prison to his wife: “The day will come when history will speak.

“Africa will write its own history and in both north and south it will be a history of glory and dignity.”

Brussels on Saturday wrote its own footnote to that history: an overdue apology.