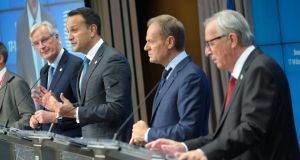 From left to right: EU chief Brexit negotiator Michel Barnier, Taoiseach Leo Varadkar, European Council president Donald Tusk and European Commission president Jean-Claude Juncker give statements to the media during the summit of EU leaders on Thursday in Brussels. Officials announced earlier in the day that EU and UK negotiators have reached an agreement on the United Kingdoms departure from the EU. Photograph: Sean Gallup/Getty