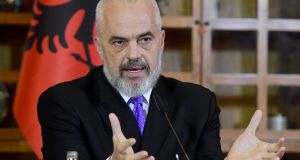 North Macedonia and Albania reacted with dismay on Friday to a decision by member states not to start accession talks with the two Balkan candidate countries.

France led opposition to calls to open negotiations with Tirana and Skopje, insisting on the need to overhaul the European Union enlargement process despite assertions from Brussels that both countries had met the demands made of them so far.

Critics of the refusal warn that it could strengthen populist and nationalist forces in both countries, undermine reform efforts and discredit the EU while boosting the influence of rival powers such as Russia and China.

“The least that the European Union owes the region is to be straightforward with us. If there is no more consensus on the European future of the western Balkans . . . the citizens deserve to know,” said Nikola Dimitrov, North Macedonia’s foreign minister.

He was a key negotiator of a deal that North Macedonia signed with Greece last year to change its name, ending a 27-year dispute that was seen as Skopje’s main obstacle to accession talks.

French president Emmanuel Macron insisted the EU needed to change before accepting new members, and to decide on “a reformed enlargement process, a real credibility and a strategic vision of who we are and our role.”

The Netherlands and Denmark were reportedly willing to allow North Macedonia to start accession talks but joined France in calling on Albania to do more to fight crime and corruption.

Albanian prime minister Edi Rama told The Irish Times last week that his country was “collateral damage” in the EU’s own internal disputes. “The western Balkans is surrounded by EU borders,” he said.

“When they talk about illegal migration, transnational crime and security – all these are reasons why the EU needs the western Balkans as much as we need the EU,” he argued.

“To have this area like a grey zone in the middle of the continent and within EU borders and not think strategically – well, it’s not very visionary.”