Berlusconi will be fondly remembered only for his antics and playacting

Opinion: First appearing as a free market reformer his main contribution was to erode democracy 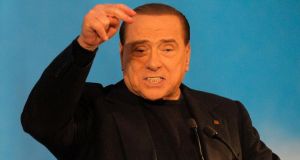 Under Berlusconi, populism, in an undemocratic mould, has made headway. Photograph: Getty Images

How many people in Ireland can name Italy’s current prime minister or president? Not many. Even fewer would be able to name two or more current figures in Italian politics. Yet everyone in Ireland, indeed throughout the world, can name at least one living Italian politician: Silvio Berlusconi.

On Wednesday November 27th, the curtain came down on the long, sometimes illustrious, often colourful, always controversial career of the most famous Italian statesman since Mussolini. Berlusconi was elected prime minister on three occasions, and can boast the record for being the longest serving prime minister of the post-war era.

When he formed the Forza Italia political party in 1994, and swept into power within months of doing so, the expectations were that he would change the political and economic landscape by reforming the highly bureaucratic and inefficient Italian way of doing things.

It was also expected that he would allow free markets and open competition to flourish, in a fashion not dissimilar to what Mrs Thatcher did in the UK post-1979.

Vitriolic rhetoric
But notwithstanding the rhetoric, which was often vitriolic towards the opposition or anyone who challenged him, the reforms never materialised and the only changes enforced always seemed to be tailor-made to suit his own interests – such as decriminalising accounting fraud and consolidating his media empire despite concerns of anti-trust and conflict of interest.

By the time Berlusconi’s third government collapsed in 2011, the Italian economy was on its knees. Growth and productivity were at an all-time low – in the last decade only Zimbabwe and Haiti had lower GDP growth than Italy. Unemployment is today still worryingly high, with youth unemployment at an unprecedented 36 per cent.

It will take a few years before historians will be able to accurately assess the long- term impact Berlusconi had on Italian politics and society, but one could be forgiven for hazarding a few tentative conclusions.

First, Berlusconi was responsible for legitimising extreme right-wing parties in Italian politics. His first coalition government included the extreme right-wing National Alliance party, which was historically linked with Italy’s fascist movement. As a result, in 2008 a former neo-fascist youth leader, Gianni Alemanno, was elected mayor of Rome, and greeted by crowds of supporters making the raised arm fascist salute while shouting ‘Duce! Duce!’

Act of condescension
Second, Berlusconi did his best to delegitimise democratic procedures and the democratic ethos. When things weren’t going his way, Berlusconi urged his supporters to take to the streets, in part to remind people of the enduring support he enjoys, but especially as an act of condescension against the authorities that dared to challenge his supremacy.

Populism, especially of the anti-democratic mould, has once again become very popular in Italy, in no small part thanks to Berlusconi.

As a succession of legal cases were brought against him, ranging from corruption to bribery to tax fraud to child prostitution, Berlusconi constantly questioned the impartiality of the magistrates. In the process, he attempted to undermine the independence of the judiciary from the legislative and executive branches of power.

This repeatedly showed his contempt for the fundamental principle of checks and balances on which all modern liberal democracies rest.

Berlusconi even had the audacity of referring to his ejection from the Senate as a coup d’état, forgetting that the laws of the land applied to him as much as to any other citizen, and that his political debacle was brought about through legal and legitimate means and procedures.

Schoolyard antics
There is an aspect of Berlusconi’s political life that will be missed. In terms of entertainment value he will probably never be surpassed.

We will miss the schoolyard antics – flashing horns behind the heads of foreign dignitaries while official photographs are being taken – even his inappropriate jokes about Hitler doing things “properly” next time, or his comment about US president Obama being young, handsome “and even tanned”.

Sadly for Berlusconi, politics is a serious business, and right now serious effort is required to get Italy out of the mess in which it finds itself after years of mismanagement and political opportunism.

Vittorio Bufacchi teaches philosophy at University College Cork. He is the co-author (with Simon Burgess) of Italy Since 1989: Events and Interpretations (Palgrave 2001).

1 All students will not return to school even if social distancing rules are relaxed – McHugh
2 Emily Maitlis thanks BBC viewers for support after Cummings row
3 Church closes its doors after flouting public health rules
4 Miriam Lord: Taoiseach is trapped in a Zoom session from hell
5 The human cost of Covid-19: Ireland's care homes with the most deaths revealed
Real news has value SUBSCRIBE