Berlin Brandenburg International meant to be €600m project but is now costing €5.4bn 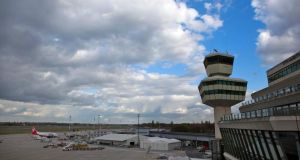 The control tower at Berlin-Tegel airport, due to close when the Berlin Brandenburg International opens. Photograph: Krisztian Bocsi/Bloomberg

Landing in Berlin airport from Dublin these days is a curious experience. Look out the window and you can see a sleek, modern terminal waiting for you. But that’s not where you’re getting out. Instead your plane trundles on and on for 10 minutes and finally opens its doors, 40 years in the past, at the tired terminal that once serviced the East German capital.

For now, all we know is that it is the whitest of white elephants and the star of an occasional Irish Times series I like to call “The Myth of German Efficiency”.

I started picking apart German efficiency in the dark, early days of Ireland’s EU-International Monetary Fund bailout. By highlighting how often and how spectacularly Germany gets things wrong, I hoped to add some levity to the grim belief that “the Germans” prowling the corridors of Merrion Street were in any position to optimise the Irish.

Its opening in June 2012 was cancelled at a month’s notice after a safety test revealed the fire prevention system wasn’t working. A closer look revealed it was actually a fire hazard. A full investigation revealed most of the airport’s crucial but invisible architecture – ducting and wiring – had not been installed according to blueprints. It all had to be ripped out and reinstalled. About 150,000 defects were found, almost half of them serious.

The €600 million airport has now cost Germany €5.4 billion and counting and, whenever it opens, will already be too small for the projected 27 million passengers annually. An inquiry has revealed a travesty of planning and political interference, but the scale of the disaster is so dizzying few Berliners bother getting annoyed about it anymore. Not even at the €16 million a month it costs them to maintain an empty airport.

Germany has dozens of such disasters, from Hamburg’s new philharmonic hall to Stuttgart’s new station. But Berlin is where German efficiency – if it ever existed – comes to die.

The only thing missing from the renovation drama of the state opera, the Staatsoper, is the musical score. The old East German theatre has been closed twice as long as planned and costs have quadrupled to almost €400 million. Whether the new reopening deadline of 2017 will be met is unclear. What is clear is how, to secure funding and public support for the project, Berlin politicians and planners deliberately underplayed the costs, construction time and likely complications of the site.

A final monument to German inefficiency is the hole in the ground that Angela Merkel can see out her front room window. The hole should have opened last year as a new reception area for visitors to Berlin’s museum island. The new opening date is 2018, four years late and, at €134 million and counting, more than twice over budget.

The main reason: it took over a year for project managers to realise the underwater construction company it contracted to lay the foundations had no idea what they were doing in the murky river Spree. As with the airport and opera, Berliners have been numbed by a tale of non-existent oversight and sloppy cost control. At this stage, they expect nothing more.

These three expensive disasters teach us a lesson about mythical efficiency. While Germany may have a system for everything, Berlin proves every day there’s no system for when the system fails.