A month into Europe’s first experiment in stringent social distancing, goodwill is beginning to fade

Over 12,000 health care workers have contracted Covid-19 in Spain amid grave shortages in personal protective equipment. Nurses and doctors showed us how they make their own gowns, masks and shields. Video: The New York Times 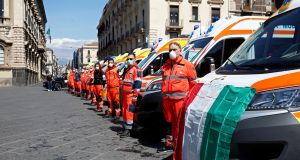 Emergency service personnel in Catania join a ceremony as mayors across Italy stand in silence on Tuesday to honour the country’s dead from the coronavirus outbreak. Photograph: Antonio Parrinello/Reuters 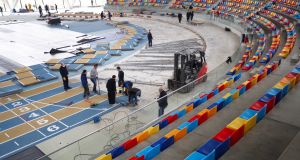 Workers dismantle the Catalunya Indoor Athletics Track during preparations to set up a temporary hospital in in Sabadell, Barcelona, on Tuesday. Photograph: Alejandro Garcia/EPA

At the start of Italy’s national lockdown to stop the spread of coronavirus, videos circulated online of entire streets singing together in solidarity from their balconies. A month into Europe’s first experiment in stringent social distancing, new footage suggests that goodwill is beginning to fade.

“We don’t have any more money!” a man screamed at police stationed outside a closed bank in the southern city of Bari in a video posted online on Friday. According to regional media, he was unable to access his state benefit payments.

“You should come to my house and see my kitchen, it’s completely empty,” his partner shouted. “You are disgusting! The state is disgusting!”

In another video, posted online by the Italian daily Corriere della Sera, a man in Naples arrives at a supermarket checkout unable to pay. “This man has no money to pay for his food, he can’t eat, he didn’t buy wine or champagne, he bought pasta and bread,” an observer argued with the staff.

Italians have begun to chafe against the restrictions as the social and economic consequences begin to bite. How long Italian society will be able to endure will be a litmus test for other Western, democratic countries who locked down later.

Tensions have been most evident in Italy’s poorer south. Over the weekend armed police were deployed to supermarkets in Palermo, Sicily, over fears that some customers would not pay for food. Leoluca Orlando, the city’s mayor, warned in an interview with newspaper La Stampa that anger in the city risked spilling over into violence.

Prime minister Giuseppe Conte announced over the weekend that €400m would be distributed to mayors to fund food coupons for locals.

Official data from the ministry of the interior suggests that most Italians are sticking to the rules. On Sunday, 203,011 people were checked and only 4,942 sanctioned by police. Of these, 142 were reported for false statements and 49 were found to have tested positive for the Covid-19 virus but were not respecting their quarantine.

Elsewhere in Europe enforcement has been more intense. According to Austria’s interior ministry, police have issued over 10,426 cautions. The ministry has promised harsh penalties for repeat offenders. In France, police have checked over 3.7 million people and issued 225,000 reports since their lockdown began.

Living under these strictures with no end in sight is starting to grate on many. “The more time I spend at home in isolation, the smaller my house becomes,” says Simona Di Bella, a 27-year-old actor from Sicily.

If Di Bella wants to step outside she, like everyone in Italy, must fill out a form to explain the reason for her excursion. If she is judged by law enforcement to have breached the rules – defined as any outing that isn’t to buy essential supplies, health reasons or urgent work – she risks a fine of up to €3,000.

“I find it very weird to have to explain myself for such ordinary things,” she said.

The tightening of restrictions since Italy’s lockdown began, such as banning jogging away from the immediate vicinity of the home or tightening the hours of supermarkets, have added to the frustration.

When the regulations first came into force on March 10th, the government thought they might be lifted by April. But Italy’s infection count is still rising, and with more than 10,000 dead, the government has said the restrictions will have to be kept in place as long as is necessary to defeat the virus.

“I want to protect myself and others but I have to admit, I feel like an inmate at times,” says Giuseppe Aparo, a 37-year-old shop manager from Avezzano in central Italy. “When I take my car, I have to keep my self-certificate with me the whole time and I know I could be stopped at any moment”.

Last week Italy’s chief of police Franco Gabrielli hit out at those who are still looking for ways to get around containment measures. “There are the extraordinary people fighting in the hospitals and then there is another battle that our [police] are engaged in to break the chain of contagion: pursuing the sly ones who are weakening the system,” he said.

A poll published on Monday conducted by SWG showed that 63 per cent of Italians still supported the actions taken by the government. “At the beginning the restrictions were not so tight, but some people weren’t able to limit themselves so step by step more stringent measures were introduced,” says Corrado Nicoletti, a 38-year-old sales manager from Rome.

In Spain, which has the second most severe outbreak in Europe after Italy, there have also been scuffles over lockdown measures, though the majority are still adhering to them.

As of last week, Spanish police had issued well over 100,000 complaints – which can lead to a fine – and detained over 1,000 people for violating the lockdown. Sanctions range from “light fines” of €100 for entering restricted areas, to heavier penalties of up to €30,000 and prison terms for the most serious breaches.

Some have criticised Spanish law enforcement for overstepping, such as reports that an off-duty nurse in Madrid, the capital, was fined for taking her adult daughter with her to take food to her elderly parents.

In other instances, the authorities have acted in the wake of public outrage. Under Spain’s state of alert, people are allowed to leave home to take dogs for a walk. However, a video of a man circumventing lockdown by taking a chicken for a stroll in Lanzarote drew ire online, and led the police to take action against him. – Copyright The Financial Times Limited 2020