Belarus to investigate opposition council as Lukashenko hits back 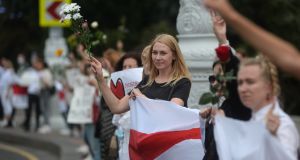 Belarusian women form a chain in support of the opposition to demonstrate against police brutality and the presidential election results. Photograph: EPA

Belarusian prosecutors have opened a criminal investigation into a council set up by opposition leaders, as strongman Alexander Lukashenko battles to reassert his hold on power following a disputed presidential election.

Mr Lukashenko claimed that he had won a landslide victory in the vote on August 9th, triggering strikes and huge demonstrations across the eastern European country from supporters of his main rival, Svetlana Tikhanovskaya, who believe the poll was rigged.

This week, Ms Tikhanovskaya’s allies established a “co-ordination council” which is meant to help negotiate a peaceful transition of power. The council has called for fresh elections, as well as an investigation into a brutal police crackdown on Mr Lukashenko’s opponents.

But Alexander Konyuk, Belarus’s prosecutor-general, said on Thursday that the council aimed at “seizing state power” and “harming Belarus’s national security” and that a criminal case had been opened.

“The creation of such bodies is not provided for by law, and their activities are unconstitutional,” said the general prosecutor’s office. The statement did not name any individuals as suspects.

Maxim Znak, a lawyer and member of the co-ordination council, which includes aides to Ms Tikhanovskaya and figures such as Belarusian Nobel Prize winner Svetlana Alexievich, said its actions were not illegal.

“We did everything openly and transparently, everything is published and is in the documents of the council,” Mr Znak told Tut.by, an independent Belarusian website.

The criminal case is the latest effort by Mr Lukashenko to regain the initiative after 12 days of protests and strikes which represent by far the most serious challenge he has faced during his authoritarian 26-year rule.

Mr Lukashenko’s regime initially launched a savage crackdown on protesters, during which at least three people died, hundreds were injured and nearly 7,000 were detained, before backing off at the end of last week.

As police backed off, the protests mushroomed, and on Sunday, hundreds of thousands of Belarusians took to the streets in cities and towns across the country to protest against Mr Lukashenko’s regime.

Mr Lukashenko also came under fire from the international community. The EU said on Wednesday that it would impose sanctions on a “substantial number” of individuals responsible for violence, repression and fraud around the “neither free nor fair” polls.

However, over the past 24 hours, there have been renewed signs that Mr Lukashenko is trying to reassert his authority.

On Wednesday he ordered the interior ministry to put an end to strikes in the capital city of Minsk, while police detained workers at a state-owned company who were participating in a strike, and sealed off various buildings that had become a focal point for protesters.

He also ordered combat units to Belarus’s western border with Poland, and told his security services to hunt down the protest organisers. – Copyright The Financial Times Limited 2020