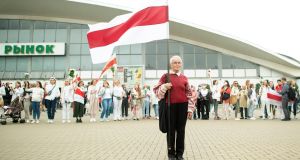 Authorities in Belarus have blocked more than 50 news media websites reporting on how the country has been shaken by two weeks of protests demanding that authoritarian president Alexander Lukashenko resign after 26 years in power.

The Belarusian Association of Journalists reported the shutdowns Saturday, which included sites for the US-funded Radio Liberty and Belsat, a Polish-funded satellite TV channel focusing on neighbouring Belarus.

Protests unprecedented in Belarus for their size and duration broke out after the August 9th presidential election, which election officials say handed Mr Lukashenko a sixth term in office in a landslide.

Protesters allege the official results are fraudulent and are calling for Mr Lukashenko to resign.

Police responded harshly in the first days of the protests, arresting some 7,000 people and beating many of them.

But the police crackdown only widened the scope of the protests, and anti-government strikes have been called at some of the country’s main factories, former bases of support for Mr Lukashenko.

Some police have posted videos of themselves burning their uniforms and quitting.

In an enormous show of defiance, an estimated 200,000 protesters rallied on August 16th in the capital, Minsk.

Mr Lukashenko’s main election challenger, Sviatlana Tsikhanouskaya, has called for another massive show of opposition at a protest on Sunday.

“We are closer than ever to our dream,” she said in a video message from Lithuania, where she took refuge after the election.

Some previous presidential challengers in Belarus have been jailed for years.

On Saturday, hundreds of women dressed in white formed a chain in Minsk as sign of protest and a larger demonstration was expected in the evening. – Associated Press