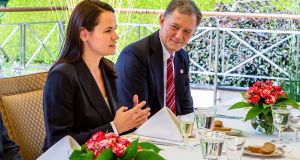 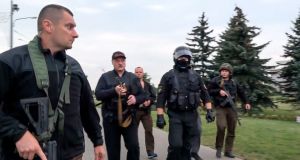 Belarusian president Alexander Lukashenko (second left), armed with a Kalashnikov-type rifle, walks surrounded by his bodyguards near the Palace of Independence in Minsk on Sunday. Photograph: State TV and Radio Company of Belarus via AP

Several prominent opposition activists have been detained in Belarus as its autocratic president, Alexander Lukashenko, tries to ride out an unprecedented wave of protests and strikes against his 26-year rule.

Olga Kovalkova and Sergei Dylevsky – two leaders of the opposition “co-ordination council” that wants to negotiate a peaceful transfer of power in Belarus – were held by police on Monday outside the Minsk Tractor Factory, where long-time employee Mr Dylevsky organised a strike when nationwide demonstrations erupted this month.

Police also reportedly detained Sergei Lavrinovich, a member of the strike committee at a major Minsk truck factory, and Anatoly Bokan, a strike organiser at Belaruskali, the world’s biggest potash producer and one of the country’s main sources of foreign revenue.

Mr Lukashenko had threatened to take tougher steps against his opponents this week, and on Monday he said schoolteachers who did not support the “state ideology . . . should not be in school.”

“If someone has crossed over to the other camp, then we need to deal with them too,” he told education minister Igor Karpenko.

Despite warnings that protests would not be tolerated and striking workers would be sacked, Belarusians defied Mr Lukashenko again in huge numbers on Sunday, when more than 100,000 people marched through Minsk and smaller crowds took to the streets of other towns and cities.

Though the marches were peaceful, Mr Lukashenko deployed armed troops to guard a war memorial in Minsk, and later flew to the presidential palace in the city with his son Nikolai (15), where both emerged from the helicopter wearing flak jackets and wielding automatic rifles.

“All week they tried to scare us and set us against each other . . . But yesterday it became clear that nothing worked out for them, and it won’t work out,” said Maria Kolesnikova, another leader of the opposition’s co-ordination council.

“We are a unified people and the authorities should understand one simple thing: it’s impossible to turn back the current situation. We demand that the voice of the majority be heard,” she added.

“We consider it very strange that the person running the country should allow himself to run around in a very strange outfit with a strange weapon in the middle of Minsk . . . If he thinks that 80 per cent of the Belarusian people voted for him, then why is he hiding in fear behind barbed wire?”

Mr Lukashenko (65) insists he secured a landslide victory in an August 9th election that his critics and the European Union say was neither free nor fair.

Opposition candidate Svetlana Tikhanovskaya says she won the vote. She fled to Lithuania after allegedly being threatened in Belarus, and Mr Lukashenko now claims that Nato troops in that Baltic state and neighbouring Poland pose a threat to his country, and he has asked Russia to come to his aid if necessary.

Mr Lukashenko spoke about the situation in Belarus with Russian counterpart Vladimir Putin, a day before US deputy secretary of state Stephen Biegun is expected to discuss the crisis in Moscow. Mr Biegun met Ms Tikhanovskaya in the Lithuanian capital, Vilnius, on Monday.