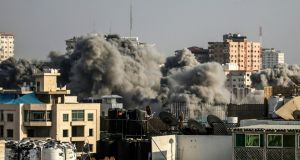 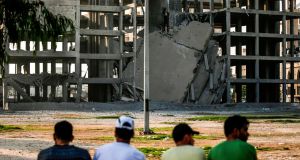 Palestinian youths look at a building that was damaged by an Israeli air strike in Gaza City on July 14, 2018. Photograph: AFP/Getty Images 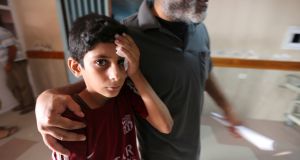 A ceasefire between Israel and Gaza militant groups appeared to be holding on Sunday after the most intensive flare-up in violence around the Palestinian enclave since a 2014 war.

In a day of fierce fighting on Saturday, Israel carried out dozens of air strikes in Gaza, killing two people, and Gaza militants fired more than 100 rockets across the border, wounding three people in a southern Israeli town.

The ceasefire, the second between the two sides to be brokered by Egypt this year after a previous day-long flare-up in May, came into force late on Saturday.

The Israeli military said that in the initial hours of the ceasefire militants fired two rockets towards Israel, of which one was intercepted by its Iron Dome system. There were no reports of an Israeli counter-attack in Gaza.

Some hours afterwards, militants fired another two mortar bombs towards Israel, which responded by striking the mortar tube used in the attack, the military said.

Weekly clashes at the Israel-Gaza border have kept tensions at a high for months. More than 130 Palestinians have been killed by Israeli forces during protests at the frontier held every week since March, including a teenager on Friday, Gaza medics said.

Mr Netanyahu has faced public pressure to take action against the launching of incendiary kites and balloons from Gaza that have burned crops and scrubland in southern Israel.

Israeli intelligence minister Israel Katz said the air strikes were meant to put an end to such attacks but should not be seen as the start of a military campaign against the Palestinian territory of two million, devastated by seven weeks of war with Israel four years ago.

Thousands were expected to attend the funerals on Sunday of two Palestinian teens killed in one of the Israeli attacks.

Blasts from Israel’s air strikes shook homes and shattered windows in Gaza, where plumes of smoke rose from the sites of the explosions.

Israel says Hamas has been orchestrating the weekly protests to distract from governance problems and provide cover for militants’ cross-border attacks. Hamas denies this.

More than 130 Palestinians have been killed by Israeli forces in the protests. There have been no Israeli fatalities during the so-called “Great March of Return” demonstrations. – Reuters, Bloomberg