Derek Scally In Baden, near Vienna 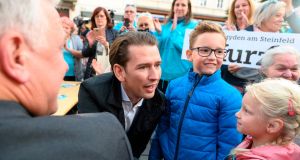 Sebastian Kurz and the pretty Austrian spa town of Baden are perfect examples of what German speakers call the Projektionsfläche – the projection screen.

A century after the Austro-Hungarian monarchy’s collapse the streets of Baden still has stucco-filled facades, a whiff of sulphur in the air and stressed Viennese stalking up and down between spells taking the healing waters, like the Empress Sisi before them.

And then there’s Sebastian Kurz. At 33, Austria’s youngest-ever former chancellor is the perfect projection screen for Baden’s conservative voters, longing for the past and uneasy for the future.

When Austria elects a new parliament on Sunday, two years after it elected the last, a defining question for 6.4 million voters is whether Kurz should be returned as chancellor.

“He’s young and he deserves a chance to change things, the older politicians are just too encrusted and sated,” said Doris Stern, a 72-year-old visitor in Baden from Vienna.

Despite his young years, Kurz is a polished professional and effective communicator with manners as manicured as his signature look: slim-fit suit and no tie.

On his watch, Austria’s conservative People’s Party (ÖVP) has been transformed into a catch-all political machine as slick as its leader’s gelled-back hair. The apolitical message blasted at supporters: “Austria needs its chancellor back.”

And like an abbatoir that uses every piece of the animal, the optimised ÖVP leader is using every minute of his 14-hour campaigning days to win back power.

At rallies here in Baden and elsewhere, he devotes as much time to selfies with supporters – to amplify his brand online – as his stump speech.

In between personalised messages direct to their smartphones, voters learn that his ÖVP is the party of balanced budgets, tax cuts and bureaucracy reduction. On climate change – a dominant election issue, he favours e-cars but opposes a CO2 levy as a “punishment exercise for people dependent on their cars to commute”.

But he has some explaining to do. Like why, after the 2017 poll, he went into coalition with the far-right Freedom Party (FPÖ). And why he dismissed regular FPÖ scandals – their hardline interior minister, anti-Semitic and anti-Muslim outbursts – as regrettable, one-off missteps.

Kurz pulled the coalition plug for a snap election. But his plan of sailing back to power as chancellor was undermined when the FPÖ, out for revenge, helped oust him with a no-confidence vote.

Since then a series of scandals has not appeared to harm the ÖVP and Kurz: not the mysterious shredding of party hard drives nor creative accounting that has seen his party’s campaign spend nearly double legal limits. But the Kurz ÖVP is not soaring either.

At 33 per cent in polls, the conservatives have an 11-point lead on the next party, the Social Democrats (SPÖ), but has gained less than two points on its 2017 election result. And in Baden, Kurz sounds unusually defensive.

“The problem of this election is that finishing first is not enough,” he said before the state theatre. “I guarantee you, if there is a majority against us, then it will be used.”

Last time around Kurz was hailed as a messiah, but now he is treading rather than walking on water.

In interviews and debates he refuses to rule out any post-election options for power. The dominant climate issue could see an approach to suspicious Greens; he has also mooted a minority government. And he has refused to rule out a return of his controversial alliance with the far right.

That’s why migration – although no longer as pressing an issue as 2017 – has not vanished from the election campaign. Kurz reminds voters how, during the 2015 migration crisis, he pushed to close the so-called Balkan Route bringing migrants to Austria and Germany. In these final days of campaigning he has warned darkly that “something is building” on migration. The message: re-elect me or risk a return to chaos.

Shrugging off scandal, leaving his political options open and refusing to be pinned down on policy, political analysts say it is very difficult to imagine any other future chancellor than Sebastian Kurz.

“The ÖVP is winning voters from the FPÖ,” said Prof Peter Filzmaier, political scientist at the University of Krems. “But it is losing voters to other parties, including the Greens in an election dominated by environmental policy.”

Austria’s political wunderkind will have to work hard for a return to power.

But with 85 per cent of voters still undecided, Sunday’s elections – and subsequent coalition talks – could bring surprises.

“I fear Kurz will just go back in with the FPÖ,” sighs local woman Daniela Arleth. “Or we’ll have failed coalition talks and another election. At this stage, we’re in training.”