Wikileaks founder has been living in London embassy since 2012 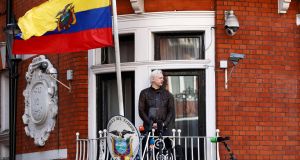 Julia Assange, founder of Wikileaks, speaking from the balcony of the Ecuadorian embassy in London on May 19th, 2017. Photograph: Neil Hall/Reuters

Ecuador has spoken to the British government about the situation of Wikileaks founder Julian Assange, who is living in the Ecuadorean embassy in London, President Lenin Moreno said on Friday.

Speculation about Assange’s future has grown after the Sunday Times newspaper reported senior officials from Ecuador and Britain were now in discussion about how to remove him from the embassy after revocation of his asylum, and a source close to him told Reuters the situation was coming to a head.

Australian-born Assange will eventually need to leave the embassy where he has been living since 2012, Moreno said at an event in Madrid.