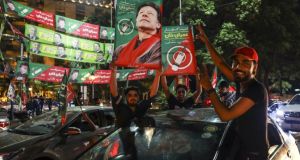 Mr Khan’s party headquarters in Islamabad was crowded with dancing followers who sensed a victory while a rival claimed widespread fraud.

Shahbaz Sharif, the younger brother of disgraced prime minister Nawaz Sharif, who has been jailed on corruption charges, rejected the election results when barely 50 per cent of the ballots had been counted, generating fears that disgruntled losers could delay the formation of the next government.

On Wednesday, a suicide bomber killed at least 29 people near a polling centre as Pakistanis voted. The Islamic State terror group claimed responsibility for the attack in the western city of Quetta, the capital of Baluchistan province. Security sources said the bomber drove his motorcycle into a police vehicle.

A hospital spokesman said 29 people were killed and 35 others wounded in the attack, which a Reuters witness said occurred near a voting centre.

Earlier this month, a suicide bomber killed 149 people at an election rally in the town of Mastung, also in Baluchistan province. The attack was also claimed by Islamic State, also known as Isis.

About 371,000 soldiers have been stationed at polling stations across the country to prevent attacks, nearly five times the number deployed at the last election in 2013.

Mr Khan emerged as a slight favourite in national opinion polls, but the divisive race is likely to come down to Punjab, the country’s most populous province, where Mr Sharif’s party has clung to its lead in recent surveys.

The election has been plagued by allegations that the powerful armed forces have been trying to tilt the race in Mr Khan’s favour after falling out with the outgoing ruling party of Mr Sharif.

“Imran Khan is the only hope to change destiny of our country. We are here to support him in his fight against corruption,” said Tufail Aziz (31), after casting his ballot in the northwestern city of Peshawar.

About 106 million people were registered to vote.

Whichever party wins, it will face a mounting and urgent in-tray, from a brewing economic crisis to worsening relations with on-off ally the United States to deepening cross-country water shortages.