Anger at plans for guided tours to show ‘greatness’ of Franco

Spanish dictator’s supporters claim his legacy has been misunderstood 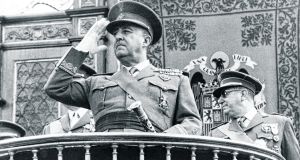 General Francisco Franco in a 1960s photograph. On winning the Spanish civil war in 1939, he became dictator until his death of natural causes in 1975. Photograph: AFP/Getty Images

Plans by supporters of Spain’s late dictator Francisco Franco to offer guided tours that seek to whitewash his legacy have provoked outrage.

General Franco’s heirs own Pazo de Meirás, a manor in the northwestern region of Galicia, near where he was born in 1892. The family uses the property, which Franco seized in 1939, as a holiday home but its protected status means it must offer guided tours four days per month.

This summer, Carmen Franco, the dictator’s 91-year-old daughter, has delegated that task to the Francisco Franco Foundation (FFF), which campaigns to keep alive Spaniards’ memory of the dictator while improving his brutal image.

In a statement, the FFF said that the tours would be “an excellent opportunity to show the public the greatness of the figure of Francisco Franco”.

General Franco led a military coup against the elected republican government in 1936, unleashing civil war. On winning the conflict in 1939, he became dictator until his death of natural causes in 1975. Mainstream historians tend to present the dictatorship as a time of poverty, isolation and violent repression, particularly its first two decades.

However, Jaime Alonso, spokesman for the FFF, told The Irish Times that such a version of events “is all a great lie” and that the Galician was more moderate than he is given credit for. Mr Alonso also said he plans to give guided tours himself in Pazo de Meirás, starting at the end of August.

The FFF’s tour plans have a drawn an angry response.

The United Left party said that in Germany it would be “inconceivable that the family of Hitler would put on display perks gained from the acquisition of goods during the barbarity of Nazism and that, on top of all that, a pro-fascist organisation would be allowed to offer guided tours in order to praise genocide”.

Meanwhile, Sada town hall has formally declared the members of Franco’s family unwelcome in the area.

Historical memory activists say that the remains of more than 100,000 Spanish victims of Franco during and after the civil war still lie in unmarked graves, an estimate supported by many historians. Amnesty International says Spain has the second-highest number of such graves in the world, after Cambodia.  However, Mr Alonso says that such claims are part of a campaign to discredit Franco since his death and that instead he “transformed Spain into an industrial society”.

The dispute has put the conservative Popular Party (PP), which governs the Galicia region and Spain, in an uncomfortable position, with opposition parties calling on it to take control of the Pazo de Meirás property.

The Galician regional premier, Alberto Núñez Feijóo of the PP, called on Mr Alonso to show more moderation in his public statements and to correct some of his recent claims, which included asserting that Franco “did not shoot people”.

Last week, the Association for the Recovery of Historical Memory presented a proposal to Congress calling for the FFF to be outlawed, with more than 90,000 signatories backing the initiative.