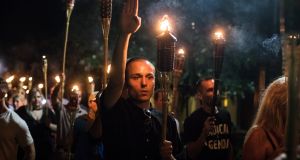 Within hours of the violence in Charlottesville, Virginia, the fight between white supremacists and everyone else moved from the streets to the digital world.

“I signed up to fight Nazis 73 years ago and I’ll do it again if I have to,” wrote John Dingell (91), a retired congressman, in a tweet that drew more than one million retweets and likes.

The digital world’s prominence in the fight was in keeping with its role in fuelling white nationalism. Alienated white men, most of them in their 20s and 30s, who populate various hate groups congregate in Reddit and 4Chan forums, often progressing from anti-Semitic or racially tinged online chats to full-blown white nationalism.

“White supremacy has been online as long as there has been an internet,” said Alice Marwick, a social media expert at the University of North Carolina, Chapel Hill. “A lot of these viewpoints are not acceptable for them to say in their day-to-day lives.”

On Twitter followers of white nationalist accounts have grown 600 per cent since 2012 and “outperform Isis in nearly every social metric, from follower counts to tweets per day”, according to a September 2016 study by a George Washington University programme on extremism.

As in other realms, the internet has made it easier to obtain and disseminate white nationalist writings.

Tony McAleer, a former organiser for the White Aryan Resistance in the pre-internet age, recalls sending away for mail-order books and attending occasional public rallies. “What might have taken a year you can consume in a weekend or a week,” he said.

On Twitter aggrieved whites have been attracted to discussions of “white genocide”, the notion that increased societal diversity threatens the future of the white race, according to the George Washington study, written by JM Berger, an expert on US extremist movements.

Followers of these accounts had favoured Donald Trump’s presidential campaign, with Trump-related hashtags outperforming “every white nationalist hashtag except for #white­genocide”, the report concluded.

Steve Bannon, Trump’s chief strategist, boasted last year that he had made Breitbart, a leading right-wing online news site, into “the platform for the alt-right”.

On Sunday Shaun King, an activist and columnist for the New York Daily News, began trying to identify the white men who were photographed in a Charlottesville parking garage beating Deandre Harris. In photos posted online, a group of four or five white men, armed with poles and pipes, can be seen assaulting the 20-year-old, who is crouched on his hands and knees.

“Who is this man with the red beard?” King tweeted along with the photo of one assailant. “He committed a violent felony.”

After King posted multiple photos of the assailants, his followers began tweeting their alleged identities.

Harris, meanwhile, told the online site The Root he had suffered a broken wrist and chipped tooth, and required eight staples for a gash in his head.

The Trump administration recently killed an effort to use online technologies to draw people away from extremism, axing a $400,000 grant for a deradicalisation group called Life after Hate in Chicago.

Run by several former members of white nationalist organisations, the group was planning to use counter-extremism technologies pioneered by Moonshot of London.

“Without the funding, we are passive. We have to wait for people to come to us,” said Tony McAleer of Life after Hate. “With the grant, we could have gone on the offensive.”

After the Daily Stormer described Heather Heyer, the young woman killed by an alleged white supremacist driver in Charlottesville, as “a fat, childless 32-year-old slut”, the hate group was targeted .

Amy Siskind, founder of the New Agenda, a non-profit group that bills itself as “the voice for all women”, tweeted at Go Daddy to cut off the site.

Less than two hours later, Go Daddy responded via tweet that it was expelling the Nazi site. “We informed the Daily Stormer that they have 24 hours to move the domain to another provider, as they have violated our terms of service,” Go Daddy said.

It is likely to be a temporary victory. “What is most likely to happen is they will move servers to somewhere offshore or another country,” said Marwick at Chapel Hill.

“The internet is decentralised. If you cut off one arm, another will grow back in its place.”