Ayahuasca is brewed with hallucinogenic plants and can harm unstable people 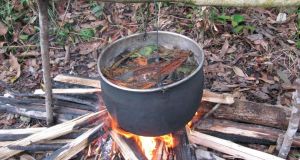 Ayahuasca therapy is the latest craze for those with cash to spend seeking quick-fix “spiritual enlightenment” – but Dutch addiction experts have warned that it can be extremely dangerous, particularly to users who are psychologically unstable.

Known for its liberal drugs policy, particularly towards “soft drugs” such as cannabis, the Netherlands is rapidly becoming the go-to location in Europe for anything to do with this “traditional spiritual medicine” from South America, also known as yagé or, more convivially, “trippy tea”.

On its home turf in Colombia, Peru and Brazil, ayahuasca is nothing new. Made primarily from the banisteriopsis caapi vine, it’s been used for centuries by indigenous cultures as an entheogenic drink, a brew believed to aid spiritual development and “cleanse the psyche of underlying spiritual ills”.

In the West, however – home to spiritual tumult – ayahuasca occupies a legal grey area.

While not illegal and made from a mix of plants, its active ingredient is DMT (dimethyltryptamine), a naturally occurring molecule that can be used as a powerful psychedelic drug which is a controlled substance, even in the Netherlands.

It’s popular because of its reputation for inducing “mind-expanding” states faster than comparable psychoactive drugs, with intense hallucinogenic trances that can apparently last up to six hours.

The good news for trippy tea fans is that Dutch drug policy focuses on hard drugs, combatting international traffickers and rehabilitating addicts, with the result that such marginal concoctions – unless they pose an immediate danger – typically fall into the “non-enforcement” category.

But as the number of “drugs tourists” trying out ayahuasca rises, alarms are sounding at Trimbos – the Netherlands Institute for Mental Health and Addiction – which says many of those using the tea with “mystical properties” don’t have the expertise to handle its potentially dangerous downsides.

“Many of those trying ayahuasca regard it as a harmless treatment for depression, for example, but they don’t realise that it should never be combined with anti-depressants,” says Eva Ehrlich, a therapist at Trimbos.

“Organisers of ayahuasca ceremonies may mean well but they’re rarely, if ever, equipped to deal with clients who are psychologically unstable or, worse still, with serious mental problems, whose equilibrium can easily be upset. In such a scenario, vulnerable people could die.”

Joost Breeksema of the Open Foundation, which promotes research into psychedelic drugs, agrees: “We know from hard experience that with any such psychedelic substances, professional training for staff, medical screening in advance, and appropriate aftercare, are absolutely essential for safety.”