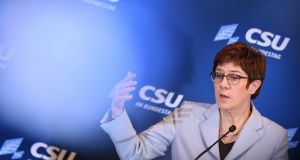 CDU leader Annegret Kramp-Karrenbauer is playing her cards close to her chest ahead of what could be a tricky reshuffle of Merkel’s cabinet. Photograph: Philipp Guelland/EPA

It was easy for the three wise men to find their way to the chancellery this year to dispense their new year’s blessing on Angela Merkel. They simply followed her sinking political star.

Amid the familiar new year ritual – costumed children from Germany’s 27 dioceses, songs, selfies and a collection for charity – Merkel knew that the real action was happening at the other end of the country, without her.

Some 650km south of Berlin, in Bavaria, her successor as leader of the Christian Democratic Union was making far-reaching political plans for the party’s political future with the CDU’s sister party, the Christian Social Union (CSU).

CSU leader Markus Söder opened his Bavarian party’s winter retreat in an Alpine abbey with the demand for a radical overhaul of the Merkel cabinet, in particular what he views as failing ministers from the CDU.

The chancellor reacted with characteristic caution to the proposal, but CDU leader Annegret Kramp-Karrenbauer surprised many by agreeing. It is clear that the Merkel cabinet – in which she sits as defence minister – needs a radical overhaul if it is to last until the end of next year.

“Markus Söder has spoken of a cabinet reshuffle, I would speak of a future-oriented team and leave open how that should look,” she said, promising to discuss the changes with Merkel.

That was another gentle slump in Angela Merkel’s authority and another quiet step for German federal politics into the post-Merkel era.

With just one state poll, next month in Hamburg, this is a relatively quiet year in Germany’s rolling electoral calendar ahead of next year’s battery of state elections and the autumn federal poll. All the better, then, to do some political renovation works before Berlin takes over the EU presidency in the second half of this year.

Besides the self-described CDU-CSU “axis” between Kramp-Karrenbauer and Söder, and their negative assessment of her cabinet, Merkel has another danger on her radar.

She knows her coalition partner – the Social Democratic Union (SPD) – remains as unstable and problematic as ever.

After another SPD leader quit last June, party leaders and grassroots members spent the second half of 2019 in group therapy. The search for a new leadership team was a desperate attempt to rebuild the dignity of a party now on just 13 per cent in polls.

Eventually members chose a new leadership team, Saskia Esken and Norbert Walter-Borjans, that promised a more striking left-wing course and which, they said, could be relied on to “stick to its word”.

It was telling, then, that their first task as co-leaders was to relativise their campaign promise to pull out of the Berlin grand coalition if elected. A clearer impression of their intentions – and demands on Merkel – will come with a meeting of coalition heads this month.

Far from bringing unity, SPD members’ choice of leaders wrong-footed the existing party establishment – almost all of whom supported other candidates. Now co-leader Saskia Esken has admitted the party is in no shape to fight a general election.

“We have no intention of setting up a grand coalition showdown,” said Esken. “After all, we find ourselves in crisis mode.”

They could yet be won over to a reshuffle if they are tempted to sideline Olaf Scholz, the runner-up in the SPD leadership race, who still holds the keys to the powerful finance ministry.

For now Kramp-Karrenbauer is playing her cards close to her chest, pre-occupied as defence minister with getting German troops in Iraq to safety. But she understands the charm of a reshuffle: a potential boost to her authority and popularity of the CDU, which in opinion polls is still five points below its disastrous 2017 election result. Fresh faces and energy at cabinet could, in turn, energise her own plans to run for chancellor in 2021.

But the CDU leader knows any renovation and redecorating with a sitting tenant – in this case Merkel lingering in the chancellery until 2021 – could be a tricky task.

“We need a new departure... new faces,” said Kramp-Karrenbauer in Bavaria. As yet it is still a taboo in the CDU to suggest, in public anyway, that what they really need in the new year is a new face in the chancellery.

1 Miriam Lord: You cannot cocoon democracy – or can you?
2 Ireland has strategy to ‘break the chains’ of coronavirus - WHO’s Mike Ryan
3 ‘Everyone still thinks it’s a joke’ - parents of toddler with coronavirus speak out
4 Varadkar: Decision next week on relaxing coronavirus restrictions
5 Coronavirus: Almost 100 staff and residents in one nursing home test positive, Dáil hears
Real news has value SUBSCRIBE