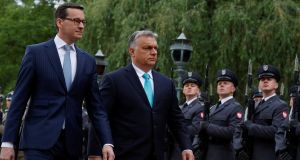 Poland and Hungary have formed a unified front on the next European Union budget and migration issues, their leaders said on Monday, as they continue to clash with Brussels over their alleged disregard for the rule of law.

Hungarian prime minister Viktor Orban visited Warsaw on his first official foreign trip since winning a third straight term in power, and he sees Poland as a major conservative ally in resisting what he calls EU and liberal efforts to weaken sovereign nations.

As government ministers from EU states discussed the 2021-2027 budget in Brussels, Polish premier Mateusz Morawiecki said he and Mr Orban had “absolutely identical” views on the need to safeguard farm subsidies and development funds for poorer members.

“I just want to mention two principles, in which I believe we have agreement. The first is that we want to protect the interests of our farmers. So we do not think it is appropriate to reduce the agricultural budget,” Mr Orban explained.

“We also agreed that we have no objections to setting up new funds, as there are always new tasks. But the creation of new funds should not be a justification for the reduction of existing funds that have been functioning well,” he added.

Mr Morawiecki also said that he and his guest had “basically . . . exactly the same opinion” on migration and their rejection of EU refugee quotas.

“Here, in Poland, it’s we who decide who will come to Poland and who will not,” he said. “Proposals by the European Union that impose quotas on us hit the very foundations of national sovereignty.”

Mr Orban won a landslide election victory last month after a campaign based on the need to keep out migrants and crack down on civil society groups that help them – especially those funded by liberal philanthropist George Soros.

“We also have hearts, we do not have stones instead of hearts,” said Mr Orban, who built border fences in 2015 to keep refugees and migrants out of Hungary.

“We are a Christian people; we know what commitments are, what it means to help. But we cannot help anyone if we destroy our country in the meantime.”

The EU is already suing Poland, Hungary and the Czech Republic over their refusal to accept refugees, and taking separate legal action against Poland and Hungary over reforms that allegedly undermine the rule of law.

The European Commission on Monday gave Warsaw until June 26th to make more changes to sweeping judicial reform that has dramatically increased the Polish government’s control over the country’s courts.

The so-called article 7 proceedings that Poland faces could result in the EU suspending its voting rights, although Hungary has pledged to shield it from punishment that would require unanimous approval from member states.

Brussels also wants Mr Orban to revoke plans to crack down on NGOs that assist migrants, but he insists that the so-called “Stop Soros” law will pass. His chief of staff, Antal Rogan, said on Monday that final Bill would in fact be tougher than earlier drafts.