Video footage from the crash site of the Malaysian airliner brought down over eastern Ukraine on Thursday (July 17), which killed all 295 people aboard and sharply raising the stakes in a conflict between Kiev and pro-Moscow rebels. Video: Reuters 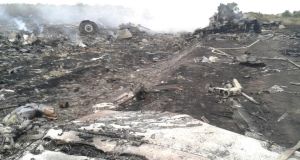 A general view shows the site of a Malaysia Airlines Boeing 777 plane crash in the settlement of Grabovo in the Donetsk region. Photograph: Maxim Zmeyev/Reuters 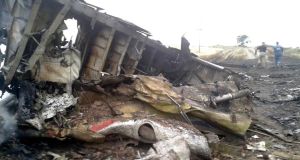 The site of the Malaysia Airlines Boeing 777 plane crash in the settlement of Grabovo in the Donetsk region today. Photograph: Maxim Zmeyev/Reuters 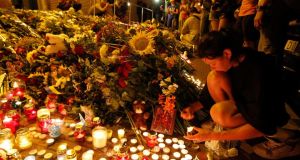 Kiev has accused pro-Russian rebels of shooting down a Malaysia Airlines jet above eastern Ukraine, killing all 295 people on board, in a tragedy that threatened to have a deep impact on the East-West dispute over Ukraine.

As the hours passed it became clear that the Netherlands, from where the aircraft had taken off bound for the Malaysian capital Kuala Lumpur, had borne the brunt of the fatalities.

A Malaysia Airlines official at Schiphol airport in Amsterdam said the passengers had included 154 Dutch, 27 Australian, 23 Malaysian, 11 Indonesian, six UK, four German, four Belgian, three Filipino and one Canadian nationals, with the nationalities of the remainder not yet identified. All of the 15 crew were Malaysians, he said.

Not an accident Last night US vice-president Joe Biden said the incident was not an accident and that the airliner had been “blown out of the sky”, while Russian president Vladimir Putin insisted Ukraine bore responsibility for the incident since it had resumed a military campaign against separatists.

“This tragedy would not have happened, if there had been peace on that land, or in any case if military operations in southeastern Ukraine had not been renewed,” Mr Putin said in televised comments.

Malaysian prime minister Najib Razak demanded swift justice for those responsible if the aircraft was found to have been shot down. Mr Najib, reading out a statement, said Malaysia had not been able to verify what caused the plane to crash, but it had not made a distress call.

Malaysia Airlines has lost contact of MH17 from Amsterdam. The last known position was over Ukrainian airspace. More details to follow.

A US official, speaking on condition of anonymity, said the United States believed a surface-to-air missile brought down the aircraft.

Mr Putin and US counterpart Barack Obama were talking by telephone about the latest western sanctions against Moscow when news broke of the disaster.

Malaysia Airlines said Ukrainian air traffic control had lost contact with its Boeing 777 at 14.15 GMT yesterday, about 50km from the Ukraine-Russia border.

Pieces of wreckage and bodies were scattered over several kilometres. Many fell in fields near the village of Grabovo, in a part of Donetsk region that is controlled by heavily armed separatists who are fighting government forces and want eastern Ukraine to join Russia.

‘Terrorist attack’ “[Flight] MH-17 is not an incident or catastrophe, it is a terrorist attack,” Ukrainian president Petro Poroshenko wrote on Twitter.

Anton Gerashchenko, an adviser at Ukraine’s interior ministry, accused rebels allegedly armed by Russia of shooting down the aircraft.

Mr Gerashchenko later issued a photograph that he claimed showed a Buk system yesterday in rebel-held territory. The militants denied involvement, however, insisting that they did not possess such high-powered weapons and, even if they did, they did not have men capable of using it.

Russian news agencies reported that the rebels had offered a three-day ceasefire to allow for work at the site. – (Additional reporting Reuters)