California quakes a timely reminder to rest of US, warns governor

‘It is a wake-up call for the rest of the state and . . . the nation,’ cautions Gavin Newsom 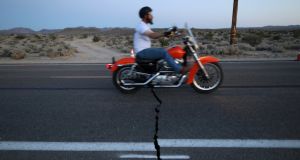 A fault line crack in Highway 178 was opened by a powerful magnitude 7.1 earthquake, which in turn was triggered by a 6.4 the previous day, near the epicentre in Trona, California. Photograph: Reuters

The two earthquakes that hit southern California should alert people across the US to the need to prepare for natural disasters, the state’s governor has said.

Gavin Newsom said on Sunday that governments must strengthen alert systems and building codes and residents should ensure they know how to protect themselves during an earthquake.

“It is a wake-up call for the rest of the state and other parts of the nation, frankly,” said Mr Newsom at a news conference to update the public on the State’s efforts to help the region hit by earthquakes on Thursday and Friday. Friday’s quake was the largest to hit southern California in nearly 20 years.

Officials voiced concerns about the possibility of significant aftershocks in the days and months to come. No fatalities or major injuries were reported after the 7.1-magnitude quake, which jolted an area from Sacramento to Mexico and prompted the evacuation of the navy’s largest single landholding, Naval Air Weapons Station China Lake in the Mojave Desert.

The second quake struck at 8.19pm on Friday and its epicentre was 18km from Ridgecrest, the same area of desert where a 6.4-magnitude tremor struck on Thursday. It left behind cracked and burning buildings, broken roads, obstructed railroad tracks and leaking water and gas lines.

The light damage was largely due to the remoteness of the area where the earthquake occurred, but Mr Newsom cautioned that after touring Ridgecrest “it’s deceiving, earthquake damage. You don’t notice it at first”.

Mr Newsom estimated more than $100 million (€89 million) in economic damage and said US president Donald Trump had called him to offer federal support in the rebuilding programme.

“He’s committed in the long haul, the long run, to help support the rebuilding efforts,” said Mr Newsom. Some 28,000 people live in the Ridgecrest area, which is sandwiched between more populated areas of southern California and Las Vegas’s Clark County. Seismologists warned that the area could experience up to 30,000 aftershocks over the next six months. – Associated Press