‘She seems a very happy young girl looking forward to a bright and wonderful future,’ tweets US president 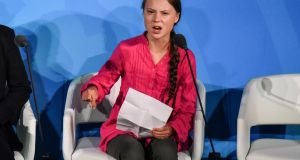 Donald Trump appears to have taken a swipe at teenage climate activist Greta Thunberg, tweeting a video of an emotional Thunberg with an apparently sarcastic comment that she seems to be “very happy” and looking forward to a bright future.

“She seems like a very happy young girl looking forward to a bright and wonderful future. So nice to see!” tweeted the US president late on Monday night.

The president tweeted out a video with the comment showing visibly upset Thunberg as she delivered a blistering speech to world leaders at a United Nations summit, saying they had betrayed young people through their inertia over the climate crisis.

She seems like a very happy young girl looking forward to a bright and wonderful future. So nice to see! https://t.co/1tQG6QcVKO

In the speech, the 16-year-old Swedish climate activist told governments: “You are still not mature enough to tell it like it is. You are failing us. But the young people are starting to understand your betrayal.”

“You have stolen my dreams and my childhood with your empty words,” she said. “The eyes of all future generations are upon you. And if you choose to fail us I say we will never forgive you. We will not let you get away with this. Right here, right now is where we draw the line.”

Thunberg, who kickstarted the global School Strike movement with her weekly Friday school strikes in Sweden, has been in New York for the climate summit. She briefly crossed paths with Donald Trump at the United Nations on Monday, as he arrived to attend a meeting on religious freedom. The US president decided to snub a major UN climate summit, held on the same day.

As Trump passed in front of Thunberg, she fixed him with a steady stare, video of which quickly went viral. Julián Castro, the Democratic presidential contender, tweeted the video with the words: “I think a lot of us can relate.”

When Thunberg arrived in New York late in August, she said she had little hope she would be able to convince the president to take action on the climate emergency: “I say ‘listen to the science’ and he obviously does not do that. If no-one has been able to convince him about the climate crisis and the urgency, why would I be able to?” she said. – Guardian service