Montréal Letter: A rock blackened by traffic fumes marks the spot where 6,000 died 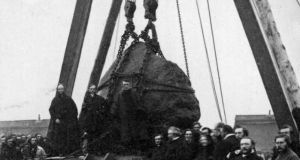 The Black Rock memorial marking the graves of typhus victims is lowered into place in 1859. It is said to be the first monument anywhere in the world marking the Famine. Photograph: William Notman/McCord Museum

A narrow traffic island on a busy motorway seems an incongruous setting for a Famine memorial. For the moment it is where Montréal honours some 6,000 Irish immigrants who died of typhus and other illnesses soon after their arrival on coffin ships in 1847-48.

A large black engraved boulder on the railed-off, grassy strip marks the approximate centre of a mass grave that was discovered in 1859 by construction workers, many of Irish descent, while building the nearby Victoria Bridge that spans the Saint Lawrence river.

Officially named the Irish Commemorative Stone but more commonly known as the Black Rock, the site, on Bridge Street, is not easy to find. And once you are there, it is difficult to access. The area is a desolate industrial zone where few pedestrians venture.

Railway tracks and roads criss-cross over the burial site, while numerous electricity pylons, car parks, big billboards and noise from heavy traffic accentuate the contrast between the world then and now. To read the monument’s inscription you need to dash across two lanes of traffic and scale a low black railing decorated with shamrocks.

It was the workmen themselves who erected the monument, in December 1859, “[T]o preserve from desecration the remains of 6,000 immigrants who died of ship fever, AD 1847-8,” reads their engraving on the boulder. It is said to be the first monument anywhere in the world marking the Famine.

Back then the site was on the waterfront but landfill has since altered the shoreline and the river is farther away. The sick had been quarantined in 22 fever sheds built to the east of the memorial site. Patients were crowded three or more to a bed, and corpses lay alongside the living.

The throngs of those needing care, combined with a shortage of medical staff, meant that by the summer of 1847 the Saint Lawrence was crowded with up to 40 ships on which hundreds more sick passengers languished. That year some 70,000 Irish emigrants landed in Montréal, a city whose population then was about 50,000.

The summer of 1847 became known in Québec as the summer of sorrow. Montréal’s system was overwhelmed, but stories abound of the hospitality, sacrifice and humanitarianism of the Québecois.

A brief explanation of the site, written in Irish, French and English, recalls that “[M]any Grey Nuns, several priests, and also the mayor of the city of Montréal, John Easton Mills, who selflessly came to care for the sick, themselves contracted typhus and died.” The Sisters of Charity in Montréal are commonly known as Grey Nuns. The Mohawks of Kahnawake reportedly brought food for the starving strangers. Thousands of so-called Famine orphans were subsequently adopted by French-Canadian families.

“Good God! What a spectacle,” the Annals of the Sisters of Charity from June 1847 reported. “Hundreds of people, most of them lying naked on planks haphazardly, men, women and children, sick, moribund and cadavers; all of this confusion hit the eyes at once.”

He eventually spotted her corpse on a pile of bodies and took her in his arms, calling her name and kissing her

The annals are thought to be among the most detailed records of any famine site. The nuns detailed many desperate scenes, including that of a man who had come from the quarantine centre at Grosse-Île and was searching for his wife, who had been sent on to Montréal ahead of him. He eventually spotted her corpse on a pile of bodies and took her in his arms, calling her name and kissing her. “Once he is convinced that she no longer exists, he abandons himself to his pain,” according to the annals. “[T]he air is filled with his cries and sobs… Scenes of this nature occur several times a day.”

The Montreal Witness newspaper described the plight of orphaned babies: “The most piteous sight of all, perhaps, is a separate shed, appropriated to the orphans, and in which sixty or eighty poor little creatures, some of them not many weeks old, are lying four and six in a berth, many of them wailing in every variety of tone. The priests, nuns, and others, are very attentive to these forlorn babies; but there appear to be no wet nurses yet, and it is almost impossible that many of them can survive.”

Every May, Montréal’s Ancient Order of Hibernians organises a walk from the city out to the stone, and there are long-held plans to build a bigger, more accessible memorial nearby. A proposal by the Montréal Irish Monument Park Foundation includes a cultural green space, a museum and GAA field.

For now, a 30-ton rock blackened by traffic fumes on a busy commuter route marks the spot where 6,000 hungry and sick refugees died just as they reached their new world, and where many Canadians, in welcoming them and providing care, themselves paid the ultimate price.