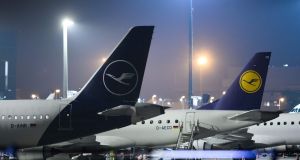 The Rutte coalition government is committed to a tax of €7 on every flight but is willingly to drop it if the commission focuses on a new EU-wide tax. Photograph: Silas Stein

The Dutch government has put together an informal nine-country coalition to lobby the EU Commission for a new European aviation tax to help cut CO2 emissions – in a move which will be hugely unpopular with airlines.

The Netherlands has been joined by Germany, France, Italy, Sweden, Denmark, Belgium, Luxembourg and Bulgaria in supporting the new tax on the basis that air travel – unlike travel by road or rail – has no tax on fuel, although it generates about 2.5 per cent of emissions globally.

The initial response from Brussels has been positive. Commissioner Frans Timmermans, a former Dutch foreign minister now responsible for EU environmental policy – the European Green Deal – said he considered the principle that the polluter pays “to be both fair and efficient”.

Although it seems little short of bizarre to 21st-century environmentalists, under the 1944 Chicago Convention on Civil Aviation, a global agreement that hails from a time when climate change was not an issue, aviation kerosene is exempted from tax in every country in the world.

This agreement could be circumvented, however, by a series of bilateral agreements between EU countries, Dutch taxation minister Menno Snel said on Friday.

There have been previous attempts to impose an aviation tax. In 2011, a proposal that would have forced airlines to buy carbon emission permits for internal EU flights and for flights to the EU from third countries, foundered on opposition from China among other non-EU countries.

Similarly, the Netherlands itself imposed a unilateral tax on air travel in 2008, but it had to be abandoned when large numbers of passengers voted with their feet – and crossed the border to German or Belgian airports.

The Rutte coalition government is committed to introducing a tax of €7 on every flight, starting in 2021, but it now says it will willingly drop that plan if the commission agrees to focus on a new EU-wide tax.

The Netherlands’ closest ally in spearheading the aviation tax plan is France where “yellow vest” protesters, demonstrating against President Emmanuel Macron’s economic reforms, have demanded just such taxes on airline travel and jet fuel – rather than on fuel for ordinary vehicles.

That has prompted French environment minister François de Rugy to side with the Dutch, saying: “The 1944 Convention needs to be changed. That is a priority we will certainly want to see taken up by the new commission.”