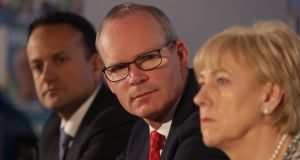 Minister for Foreign Affairs Simon Coveney has said a no-deal Brexit is now a risk, days after both sides in the talks on an EU-UK post-Brexit trade deal said the discussions were making little progress.

On Sunday, Mr Coveney said the UK was “essentially rewriting” what it had committed to in the political declaration part of the existing withdrawal agreement.

He told RTÉ on Sunday that the UK had to move on the issue of a future “level playing field” between the two sides to break the current deadlock.

“Until the UK changes its approach in the context of giving the EU assurance that they are not going to effectively deregulate their economy while expecting free access in the EU single market, I think we’re going to continue to be in real difficulty in these talks,” he added.

The UK left the EU on January 31st, but the main terms of its membership remain in place for a transition period until the end of this year to allow it time to negotiate a free trade agreement with the bloc.

Both the UK’s and the EU’s chief negotiators on Friday gave downbeat assessments of the latest round of future relationship talks, saying the other side had to give ground if any progress was to be made. The stalemate has raised the prospect that there will be no deal struck, a scenario that would damage global trade as the world copes with the economic fallout from the coronavirus pandemic.

The main sticking point in the talks has been so-called level playing field rules to ensure fair competition in the future. The EU says they are indispensable to ensure the UK does not undercut its standards, but the UK rejects them as binding it to European laws.

Senior British government minister Michael Gove said on Sunday there was a post-Brexit trade deal to be done with the EU providing the bloc agreed to compromise.

Meanwhile, Britain’s Mail on Sunday newspaper reported that the UK government was preparing to walk away altogether if no progress was made at the next round of talks due to begin in 15 days’ time and if the EU did not shift.

Europe’s chief Brexit negotiator has been told there is “significant opposition” to the UK government’s refusal to consider extending the timetable for the talks.

Both the SNP leader at Westminster, Ian Blackford, and acting Liberal Democrat leader Sir Ed Davey have signed a letter to Michel Barnier supporting an extension to the transition period.

Such a move would allow talks to place when “the efforts of national governments and the European Union will not be engaged solely with dealing with the dreadful Covid-19 epidemic”, they said.

They contacted Mr Barnier to highlight the “significant opposition to the UK government’s extreme position amongst the business community, the general public and elected representatives”.

The opposition MPs noted the Scottish and Welsh governments both backed an extension of the transition period, along with “the majority of political parties in the Northern Ireland Executive”.

The MPs said: “A consensus is taking shape and we hope the UK government will soon recognise reality.

“It is now in all of our common interests to agree and secure an extension to the transition period. This will enable these detailed and defining negotiations to be conducted at a time when, we hope, the efforts of national governments and the European Union will not be engaged solely with dealing with the dreadful Covid-19 epidemic.”

Mr Blackford said they had written to Mr Barnier because “time is running out until we hit the hard Brexit deadline”.

He insisted: “It is vital that the Tory government does the only responsible thing and accepts a two-year extension to the transition period.”

The SNP MP continued: “Crashing out with a bad deal or no deal in the middle of the coronavirus crisis would deal a double hammer blow to the economy just when we will need all the help we can get to save jobs, businesses and living standards.”

But he claimed: “It increasingly appears the Tory government is intent on taking Scotland and the UK down the path of a devastating no-deal. That would be beyond reckless.

“The coronavirus economic crash is the worst in living memory. People and businesses are already struggling to get by. The Tory government must put its responsibilities to the economy ahead of its Brexit obsession.

“Polls consistently show that the overwhelming majority of people in Scotland and across the UK want to see an extension to the Brexit transition period – and there is growing consensus across political parties. It’s time for the UK government to act.”

A UK government spokesman said: “The government was elected on a manifesto which made clear the transition period would end on December 31st, 2020. That is enshrined in primary legislation and it remains our policy.

“We will not ask to extend the transition period, and if the EU asks we will say no.

“Extending the transition period would simply increase uncertainty and prolong the negotiations, whilst also leaving us bound by EU legislation and obliged to make further payments into the EU budget.” - PA