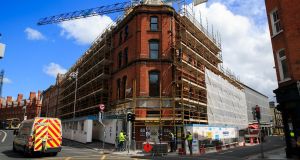 Construction workers on Dublin’s Georges Street on Wednesday. More people will be returning to work on Monday under phase one of the Government’s plan to reopen the country. Photograph: Gareth Chaney/Collins

There will be no dramatic reopening scenes in Dublin or regional towns and cities when primarily outdoor workers are allowed to resume their jobs on Monday.

May 18th, which marks the first of the five phase reopening of the economy will see just the beginning of a staged return of outdoor workers, including construction workers and gardeners. Social distancing requirements continue to apply.

Shops that are primarily outdoor, for example garden centres, hardware stores, and farmers’ markets can also reopen, again so long as social distancing measures can be put in place.

However the Government’s plan is explicit in each phase that people should “still stay at home as much as you possibly can”.

Each of the five phases between Monday and August 10th carries the stipulation that: “Remote working continues for workers or businesses that can do so”. A phased return to work for all workers will begin in August with “higher risk” businesses implementing plans for how they might reopen safely.

Dublin Chamber, whose members collectively employ 330,000 staff, said it was expecting numbers in the capital to be quite low.

There are more than 700,000 workers in Dublin according to the chamber and on average 500,000 people travel within Dublin city centre every day.

Removing 45,000 “education trips”, and 120,000 visitors, tourists, and shoppers, the chamber said there would normally be about 235,000 work-related trips. But spokesman Graeme McQueen said feedback from 1,300 firms throughout the Dublin region was that the return to work “will be very gradual”. He estimated less than 10 percent of staff will be back in Phase One .

That is likely to be as low as 25,000 workers with most city centre stores remaining closed, at least until Phase Two on June 8th.

A spokeswoman for the National Transport Authority said it too was not expecting crowds on public transport. She said the public transport network was ready for an anticipated small rise and all vehicles were being cleaned daily, but crowding on buses and trains was not envisaged and the public would be asked to “be responsible and maintain social distancing”.

A spokeswoman for the Central Bank of Ireland said it was expected that workers in the financial regulator would continue to work from home “without immediate plans to make changes”.

The Department of Business, Enterprise and Innovation said it was not in a position to provide an estimate of the numbers returning on Monday given “ the range of public health, economic and other factors and uncertainties involved”. A spokeswoman said, “ it is not anticipated” the relaxation will result “in a return to previous working practices for most workers”.

“The protocol states that - ‘Office work should continue to be carried out at home, where practicable and non-essential work. The employer should develop and consult on any working from home policy in conjunction with workers and/or Trade Unions. Advice on working from home on a temporary basis is available from the Health and Safety Authority’,” the spokeswoman said.

Ibec, which launched a new ‘Reboot and Reimagine’ campaign focussed on reopening business said it did not have any data available on the numbers projected to return to their places of work, at the current time.

1 ‘I thought it was a hoax’: Patient dies after Texas Covid party
2 US passengers fly into Dublin: ‘I’m here for six days. I guess I’ll have to stay inside’
3 Johnny Depp tells court Amber Heard threw ‘haymaker’ punch at him
4 Maureen Dowd: Biden has his limitations but he’s no Trump
5 Covid-19: Most passengers arriving from US are Irish coming home - Coveney
Real news has value SUBSCRIBE