If the pandemic has taught us little else it’s that nothing can be taken for granted again. Priorities have shifted 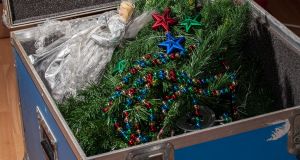 It’s November which means it’s time the Christmas decorations and tree went up – well at least as far as I’m concerned. My husband, on the other hand, believes it’s far too early, and that the first week in December is time enough.

It is as if he’s forgotten that we’re halfway through Lockdown Two, still in the middle of a pandemic, and all rules have gone out the window.

In fact we’re rewriting the rule book to spite Covid, and trying to seize back control where we can. Or perhaps that’s just what I’m doing.

Either way we’ve reached a stalemate which can only be overturned if I go up to the attic and drag the Christmas tree and umpteen boxes of decorations down myself.

I’m sorely tempted if only it didn’t involve negotiating my way through the endless boxes of baby clothes and paraphernalia, old school books and copies, and other boxes of random but definitely necessary “stuff” safely stored in case it might be needed some day.

It would also involve clambering over several boxes of football programmes and other sporting memorabilia that he refuses to get rid of in spite of the space it takes up in our overcrowded attic.

So I’m still considering it.

It’s not the first time we’ve found ourselves at loggerheads over how things should be done. One of the beauties of two people coming together and forging new traditions for their own family, is the combining of childhood experiences and memories, taking the best and bringing it forward. That is until some of those experiences are just too outlandish to be considered.

“What do you mean Santa didn’t wrap your presents?” I asked incredulously that first Christmas we were parents. It was a concept so foreign to me that I was sure he had to be mistaken.

When I realised he wasn’t, I presumed it was an experience unique to my in-laws. It made no odds in my eyes, Santa would wrap the gifts he brought to our house. There could be no other way. This was a Christmas non-negotiable.

Turns out that it wasn’t unique to my husband’s family. Nor was it the only difference in the way things were done.

I had a discussion recently with a group of parents about Christmas and whether or not they contributed to Santa’s expenses. Growing up I was always aware that my parents had made a contribution to his costs. It had never lessened the magic by any degree, but perhaps reminded us that Christmas is an expensive time for everyone and a lot of hard work goes hand in hand with the magic.

The conversation with the group of parents drew some mixed reactions. From horror at the mere suggestion, to a relatability and acknowledgement that we can balance the extensive overheads Santa incurs bringing toys to children around the world with the magic of the season. We can also lessen the pressure felt by some in the process. I’m not completely against the idea, but my husband is. The experiences from childhood holding firm. Something I’ve become even more aware of during Lockdown Two as we settle into separation from family and friends once again, and look forward to being reunited in December. The things missed most are the traditions once kept.

Living in different counties to grandparents and siblings means that milestone occasions have passed without family celebrations or meet-ups. The ordinary previously barely considered visits of old became an impossibility.

Looking towards Christmas 2020, the notion of Carpe Diem has never appealed more. Seize the day, and the opportunity to see each other because we never know what restrictions are around the corner. It’s a new tradition I’d like to take hold.

It’s not something we did enough in the past, and one we had perhaps become even worse at as busy lives prevented meet-ups, always believing there would be an opportunity next week, next month or even next summer to get together.

Yet if the pandemic has taught us little else it’s that nothing we ever took for granted before can be taken for granted again. Priorities have shifted.

After a Halloween like no other I’ve promised the children that Christmas will be extra special – that we’ll get together in whatever way we’re allowed with friends and family. There is a trepidation which comes with making plans in a year that has openly scoffed at great intentions. But in the middle of Lockdown Two it’s keeping us going.

And so might that Christmas tree if I can just convince himself to bring it down from the attic.