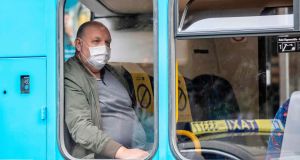 The financial impact of Covid-19 on passenger numbers has placed so much pressure on funding that the State’s 2020 allocation ran out in June. Photograph: Paul Faith

The Government will need to find €460 million in extra cash to keep public transport running until the end of the year, Minister for Transport Eamon Ryan has been warned.

A briefing document prepared for the Minister states that the financial impact of Covid-19 on passenger numbers has placed so much pressure on funding that the State’s 2020 allocation ran out in June.

Many routes operated by Bus Éireann, as well as Dublin Bus and train services run by Irish Rail, receive money from the State known as “public service obligation” funding. This is on the basis that certain routes could not be operated commercially, and last year the State provided €287 million in such funding.

The National Transport Authority (NTA) has given new funding forecasts for transport to the Government, with recent estimates showing that €460 million extra will be needed for the rest of the year, in addition to the approximately €300 million already spent to date.

The coronavirus crisis delivered a “profound and swift shock to the public transport sector”, the document states.

“Prior to phase one [of reopening] daily passenger numbers fell by approximately 90 per cent of normal levels across all operators.”

The briefing note has also warned the Government does not know how much the State’s three planned “mega-projects” will cost, despite the fact work is already under way.

The National Development Plan, published in early 2018, put aside €8.6 billion over 10 years for a number of projects and programmes including BusConnects, the Dart expansion and MetroLink.

However the initial financial estimates were “based on very early-stage, conceptual-level estimations and were not underpinned by robust cost-estimation processes”, Mr Ryan has been warned.

The briefing says that “it is to be expected that costs estimated in the robust manner envisaged for these mega-projects will differ considerably from high-level, conceptual-level costings.

“Since publication of the National Development Plan, work has continued on all three of the mega-projects; however, the department has not yet received the preliminary business case in respect of any of the three mega-projects with BusConnects Dublin being the first of the projects expected to reach that stage later in the year.”

Mr Ryan was also told of issues around potential backlogs at Dublin Port in the event of a no-deal Brexit, as land located around the port which was to be used for heavy goods vehicles (HGVs) to queue in is no longer available.

“The group had developed management and communication contingency plans for a no-deal Brexit in 2019, including a number of sites as holding areas for HGVs should they have been required. Two of the sites identified were available for a short period only in 2020 and will not be available for January 1st, 2021. The group is now seeking to identify potential alternative sites,” the Minister was told by officials.

“Work is continuing in Dublin and Rosslare Ports for the additional revenue, agriculture and health checks required from January 1st, 2021.”

In terms of overall progress on Brexit negotiations, officials said this had been “disappointing” and that a number of Government departments were currently working on contingency plans in the event of a no-deal scenario.