Conservative focuses on economy in bid to hold off Liberal challenge 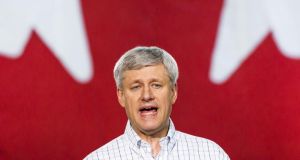 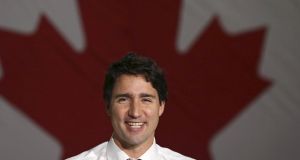 Liberal leader Justin Trudeau smiles during a campaign rally in Winnipeg, Manitoba, at the weekend. Canadians go to the polls in a federal election today. Photograph: Reuters/Chris Wattie

Outside the Congress Center in Etobicoke, a western suburb of Toronto, a man with a demon mask pranced in the street holding a sign that said “Welcome to Harperland”. Along the street a little, protesters booed cars on their way in to the car park.

Inside the arena, prime minister Stephen Harper, along with a raft of Conservative candidates, made his final pitch to the “Ford Nation”, the group of diehard conservative fans who coalesce around the city’s former crack-smoking mayor, Rob Ford, and his family.

Ford may no longer be mayor – he is now a city councilman – but the Ford family still draws a crowd. Around 1,500 loudly enthusiastic Conservative supporters gathered to hear Ford’s brother Doug – who had subbed-in for Rob in the mayoral election after the latter was diagnosed with a rare form of cancer – introduce Harper.

At Ford’s first mention of Liberal party leader Justin Trudeau, whom polling suggests will emerge as the leader of the largest party on Monday, the room erupted into loud booing and cries of “shame”.

Harper’s short speech was characterised by heavy leaning on the word “protect”, but he stuck largely to economic themes.

“It is all about protecting jobs, protecting hardworking families, protecting local businesses,” he began. “We all know that were part of a very unstable global economy – a vote for [the Conservatives] is a vote to protect our jobs.”

He said he wanted to talk about “what Canadians would lose, would risk, if the Liberals form a government”.

Using the gambit that has become familiar in the late stages of the campaign, he illustrated his attacks on the Liberals with a loud “ker-ching” cash register sound effect.

After Harper’s speech was finished one of the attendees, Kamlesh Shah, wearing a Stephen Harper T-shirt over a traditional white Gujurati zhabba, said that he was impressed by the Harper prime ministership. “He’s been doing a very good job,” he said. “He’s been a great prime minister.”

“[The Liberals] talk about all these taxes,” he continued. “We don’t need more taxes.”

“We love him!” shouted Susan Pollock, who was here with her daughter Vivian. Both of them wanted to emphasise that, in their view, it was Harper’s leadership which had prevented Canada from falling into a recession after the 2008 financial crisis.

She said she was hopeful for a Conservative win today, but “it looks like there’s a chance he won’t”.

“There is an awful lot at stake,” he said. “The choice we make is going to have real consequences for the next four years for families, for seniors, for small business.”

A Nanos survey released yesterday put the Liberals at 37.3 per cent, approaching levels needed to win a majority in parliament, ahead of today’s vote. They lead the Tories by almost 7 percentage points.

“Elections in some ridings are determined not by who votes, but by who does not vote,” Conservative member of parliament Peter Van Loan said at the rally.

The left-leaning New Democratic Party stand at 22.1 per cent in the Nanos poll. NDP leader Thomas Mulcair held events in Toronto on Sunday before traveling to Montreal, where his party is facing a close contest with the separatist Bloc Québécois. (– Guardian Service/Reuters)