Britain joins US in introducing electronics restrictions on flights 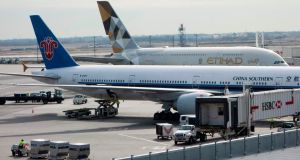 An Etihad Airways jet at John F Kennedy International Airport in New York. Passengers travelling to the US from 10 airports in eight Muslim-majority countries will be prohibited from bringing large electronic devices on board. Photograph: Don Emmert/AFP/Getty Images

Airline passengers travelling to the US and UK from a number of Middle Eastern and north African countries have been barred from carrying large electronic devices into the main cabin under new counter-terrorism measures.

The US Transportation Security Administration on Tuesday told nine airlines that operate direct flights to America that they had four days to implement the new rule. The measure will affect flights departing from 10 airports in eight countries: Saudi Arabia, Jordan, the United Arab Emirates, Qatar, Kuwait, Turkey, Egypt and Morocco.

The UK followed suit, saying it too would immediately impose similar device restrictions, but it added flights from Tunisia and Lebanon to its list, and excluded those from the UAE, Kuwait and Qatar.

“We face a constantly evolving threat from terrorism and must respond accordingly to ensure the protection of the public against those who would do us harm,” the British government said on Tuesday.

There were no plans to introduce similar measures in Ireland. “Security measures at Irish airports have not changed nor are they expected to change in the near future,”said a spokesman for the Department of Transport, Tourism and Sport.

France’s aviation authority said it was conducting a “risk assessment”, but the government had yet to decide how to proceed. Canada said it would make a statement on restrictions later on Tuesday.

The steps taken by the US mark a fresh attempt to tighten security after President Donald Trump vowed to do more to tackle terrorism. It comes two weeks after he issued a revised travel ban that – before it was blocked by the courts - temporarily barred citizens of six largely Muslim nations from entering America.

Passengers flying to the US from the eight countries will have to put laptop computers and other big devices, such as tablets and cameras, in their checked luggage under the measure.

The new US measures will hit the operations of the big three Gulf airlines that have become the most important force in long-haul aviation over the past two decades and which have extensive operations between the US and their international hubs in the Gulf. All rely heavily on passengers who transfer between points in Asia, Africa and the Middle East to reach countries in the west, including the US.

The biggest impact will be felt by Emirates, which operates 119 weekly flights between Dubai and US destinations including New York and Los Angeles. Qatar Airways, which operates between its Doha hub and the US, and Etihad, which flies Airbus A380 superjumbos twice a day between Abu Dhabi and New York, will also be hit.

The rule also affects Saudi Arabian Airlines, Royal Jordanian Airlines, Kuwait Airways, Turkish Airlines, EgyptAir and Royal Air Maroc. US airlines do not operate direct flights from the eight countries to the US.

The UK ban affects 14 airlines – both foreign and domestic – including British Airways, EasyJet and Turkish Airlines. “We think these steps are necessary and proportionate,” the UK government said. “We have spoken closely with the US [about which countries they have included] but we have each taken our own decisions on this.”

US officials declined to say what had prompted the move, but pointed to incidents over the past couple of years that had raised concerns about the threat of explosives being brought on to aircraft.

The officials referred to the EgyptAir flight that crashed into the Mediterranean en route from Paris to Cairo last year. While there has been no definitive ruling on the cause of the crash, which killed all 66 people on board, traces of TNT, the explosive, had been detected on the remains of some of the recovered victims, prompting speculation that the flight was brought down by terrorism. There was early speculation that the flight was brought down by a device hidden in a passenger’s laptop computer.

The officials also highlighted a case in February 2016 in which a laptop exploded on a Daallo Airlines flight shortly after the aircraft took off from Mogadishu in Somalia. “Evaluated intelligence indicates that terrorist groups continue to target commercial aviation, to include smuggling explosive devices in various consumer items,” the Department of Homeland Security said.

Officials refused to elaborate on whether they were responding to new intelligence or whether the administration introduced the measure based on existing intelligence.

Adam Schiff, the top Democrat on the House intelligence committee, welcomed the move. “These steps are both necessary and proportional to the threat,” said Mr Schiff. “We know that terrorist organisations want to bring down aircraft and have continued to employ creative ways to try and outsmart detection methods.”

Officials said the rule applied indefinitely but authorities would keep evaluating the intelligence to determine if threats remained. They did not explain why there was less risk if devices were transported in the hold instead of the passenger cabin, but said the rule had been issued with input from the Federal Aviation Administration.

“We don’t understand why these measures are being applied for Istanbul,” said Sani Sener, the chief executive of TAV Airports Holdings, which operates Ataturk international airport. “We have very high security measures for both regular passengers and for transit passengers when they come to Turkey.”