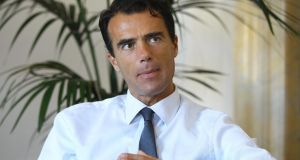 In the run-up to next Saturday’s informal EU summit in Rome, held to mark the 60th anniversary of the EU’s founding Treaty of Rome on March 25th, 1957, many minds will be on the one EU member who will not be there, namely the United Kingdom.

“We’re going to sign a political declaration . . . an important affirmation of our unity, yes, but also an expression of our identification of new political objectives for the integration process such as common defence, social union, growth and investment with obvious reference to younger people.”

Gozi says there will obviously be a political reaction to the events of last year. “The Brexit vote, the new divisions in Europe, the euro zone debt crisis . . . you are simply not credible if you do not make reference to these things.”

In an interview in the Italian weekly L’Espresso this week, one of the EU’s founding fathers, former French president Valery Giscard d’Estaing, who as a young parliamentarian ratified the treaty 60 years ago, argued that today’s EU is “neither governed nor governable”, essentially because it has become too large at 27 members.

Gozi disagrees: “This is an old idea from Giscard d’Estaing, one of creating a closed group of countries, a selective group where you keep people outside the door; this is obsolete. On the contrary, I believe that the single market can be run for 27 and even more countries. I believe we have to further develop the single market and create a bigger goods and services market. We must pursue a dynamic that will create further integration. We need to create new elective, not selective, clubs.”

Gozi says the declaration to be adopted at this weekend’s summit will state that Europe “is our common future”, that the EU member countries “take pride in the achievements of the EU” and that on their own, rather than united, member countries “would be sidelined by global dynamics”.

“This cannot be merely a document of celebration, it has to be a political document which will favour the launch of a new political process . . . and the political relaunch of the EU,” he says. “By making this 60th anniversary of the EU a big event, we [Italy] hope to promote a new political debate about Europe.”

Italian media have been predicting violent protests in Rome on Saturday, with legitimate demonstrations being infiltrated by anarchic “black bloc” and neo-fascist right wing elements similar to the riots that marked the Genoa 2001 G8 summit.

Gozi says the heavy security presence and controls around Rome’s town hall, the Campidoglio, where the main ceremony takes place, are “routine” for an event due to be attended by more than 40 heads of state and government as well as senior EU figures.

“To a certain extent our security concerns are really the ‘routine’ concerns linked to any big event like this,” he says. “In fact the only different thing in Rome will be the fact that, whereas normally events like this generate only protest marches, this celebration will also be marked by a pro-EU march, with people on the streets asking for ‘more Europe’ rather than less of an EU presence.”

1 ‘I thought it was a hoax’: Patient dies after Texas Covid party
2 US passengers fly into Dublin: ‘I’m here for six days. I guess I’ll have to stay inside’
3 Johnny Depp tells court Amber Heard threw ‘haymaker’ punch at him
4 Maureen Dowd: Biden has his limitations but he’s no Trump
5 Coronavirus: No new deaths and 11 further cases reported
Real news has value SUBSCRIBE