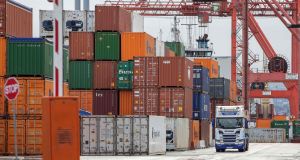 Dublin Port this week. Traders have expressed frustration at the layers of new border controls applying now on imports from Britain. Photograph: AFP via Getty

Part of the State’s customs import IT system went down on two days this week, with businesses reporting that it contributed to delays around post-Brexit border controls on imports from Britain.

The technical issues led to the Revenue Commissioners engaging with a Greek company that has provided integrated software for the system used to manage customs import declarations.

Traders have already been struggling with the paperwork requirements for customs declarations and other border controls on volumes of freight being imported from Britain.

Revenue said there had been “some systems performances issues” and “technical issues” with one of its two import systems, the automated import system (AIS), on Wednesday and Thursday.

“However, Revenue issued clear and timely communications when the performance issues were identified and it was clear that there was an impact beyond a single or small number of traders or businesses,” said the spokeswoman.

“This action enabled affected businesses to then continue to arrange for the movement of their goods.”

The Revenue said it had carried out “significant work” to increase the capacity of its IT systems to manage increased trade with Britain post-Brexit and “to handle the increased transaction levels of as many as 20 million customs declarations a year arising as a result of Brexit”.

This is an increase from about one million declarations processed before Brexit.

The Revenue said its approach to meeting IT requirements included purchasing software from external providers and integrating it into its own systems.

“In this instance, a Greek company with a track record of work in the customs arena, and following an open procurement process, provided such a solution,” the spokeswoman said. “The company is working collaboratively with Revenue in supporting and maintain the new system.”

Traders have expressed frustration at the layers of new border controls applying now on imports from Britain now that it has left the EU single market and customs union, requiring customs, regulatory, veterinary and health checks on various goods imported across the Irish Sea.

Veteran customs agent Owen Cooke, chairman of the Independent Express transport group and the Pallet Network storage firm, said Revenue’s IT system going down on Wednesday and Thursday had delayed the release of goods lorries arriving from Britain.

Mr Cooke said that there was freight that had already been entered and actually pre-cleared or “green-routed” to leave Dublin Port but was delayed by the systems failure.

“The whole port was held up all day [on Wednesday] because this system that they say was perfect, which is a disaster, went down and they sat on the freight all day,” he said.

On questions raised by businesses about the Revenue’s IT system, the spokeswoman said: “In most cases, where concerns have been raised by business with Revenue in relation to the IT systems, the actual error has been as a result of data input mistakes rather than systems performance issues.”