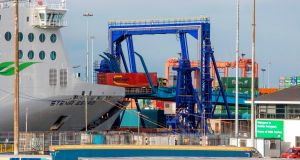 The Republic is a global hub for pharma and medtech, playing host to 24 of the top 25 biggest players, including Pfizer, Johnson & Johnson, Roche, Novartis and AbbVie. Photograph: AFP via Getty

Irish goods exports increased in value by €2 billion in November on the back of a surge in exports of medical and pharmaceutical products linked to the pandemic.

The latest trade numbers from the Central Statistics Office (CSO) show the value of goods exports rose month on month by 17 per cent to €14.4 billion in November.

The strong performance was led by exports of medical and pharmaceutical products, which were up by 74 per cent at nearly €7 billion compared with November 2019.

The CSO said pharma exports accounted for 48 per cent of the total value of goods exports in November.

The Republic is a global hub for pharma and medtech, playing host to 24 of the top 25 biggest players, including Pfizer, Johnson & Johnson, Roche, Novartis and AbbVie.

These companies have been ramping up production to meet soaring demand for medicines and products connected with the treatment of Covid-19.

On the import side, the figures show seasonally adjusted goods imports increased by 21 per cent to €8.4 billion, which resulted in a trade surplus of just under €6 billion million in November.

The pick-up in imports was driven other transport imports, excluding aircraft leasing, which was up by 16 per cent to €6.9 billion on same month in 2019.

Medical and pharmaceutical imports were also up by 78 per cent to €1 billion.

As the Brexit deadline approached, exports to Britain rose by €382 million (+35 per cent ) to €1.4 billion, again driven by exports of medical and pharmaceutical products

However, the value of goods exports to Britain in the first 11 months of 2020 was €11.4 billion, which represented a decrease of 9 per cent compared to 2019.

The EU accounted for just over €5.9 billion or 40 per cent of total goods exports in November, of which €1.9 billion went to Belgium.

The US was the single largest export destination, accounting for €4.4 billion or 30 per cent of total exports in November.

The figures show the EU accounted for €3 billion or 36 per cent of total goods imports, which was up 7 per cent compared with November 2019.