Johnson and EC president to meet amid deadlock gloom

Sides at impasse on issues including fair competition, fisheries and security 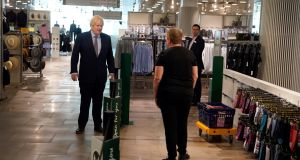 British prime minister Boris Johnson during a visit on Sunday to a London shopping centre before it reopens to the public on Monday. Photograph: Andrew Parsons/EPA

Boris Johnson and European Commission president Ursula von der Leyen will meet by video conference on Monday amid gloom on both sides over talks about Britain’s future relationship with the European Union. The meeting, which will include European Council president Charles Michel and European Parliament president David Sassoli, comes three days after Britain rejected its last chance to seek an extension to the post-Brexit transition beyond the end of this year.

The two sides are deadlocked on fair competition commitments, fisheries, security and judicial co-operation, and the governance of any future agreement. But chancellor of the exchequer Rishi Sunak said on Sunday that he saw signs of progress and that Britain is still hoping for a zero-tariff, zero-quota free trade deal.

“Our first preference would be to have an ambitious and comprehensive trade arrangement with the European Union. We remain committed to that and we remain committed to approaching those talks in a constructive and open fashion. I’m glad that we’re making progress on those and I very much hope that they can conclude positively,” he told the BBC.

“That’s indeed our ambition and that’s what we want as a comprehensive and deep trading arrangement with our EU partners which would involve zero tariffs, zero quotas and lots of other agreements as well, not just tariffs to make sure that we can have a constructive partnership. So we do remain very committed to that and that’s what these talks are designed to help achieve.”

Britain has retreated from a threat to walk away from the talks by the end of June if there was no sign of a deal but the two sides have agreed to an intensified schedule of meetings over the summer. EU chief negotiator Michel Barnier has identified October 31st as a deadline for a deal to be agreed but Britain wants to accelerate that timetable.

Sources close to the talks suggest that the shape of a deal on “level playing field” commitments on environmental, employment and consumer rights is visible. But Britain continues to resist the EU’s demand that it should continue to follow the same rules on state aid to industry.

For its part, the EU is resisting Britain’s attempts to circumvent EU rules of origin on manufactured goods by allowing components from countries with which both Britain and the EU have free trade deals to be classified as British.

As Britain struggles to reopen its economy in the face of stubbornly high levels of coronavirus infection, World Trade Organisation director general Roberto Azevedo said failure to agree a deal with the EU would amplify the impact on the economy.

“In these circumstances the less disruption the better. The less turbulence the better,” he said.