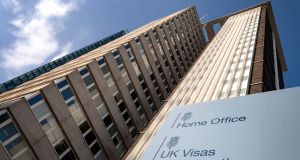 Giovanni Palmiero was told that he needed the presence of his mother and father when he made his application for the EU settlement scheme at an advice centre in Islington, London. Photograph: iStock

A 101-year-old Italian man who has been in London since 1966 was asked to get his parents to confirm his identity by the Home Office after he applied to stay in the country post-Brexit.

In what appears to be a computer glitch the Home Office thought he was a one-year-old child.

Giovanni Palmiero was told that he needed the presence of his mother and father when he made his application for the EU settlement scheme at an advice centre in Islington, London.

When the volunteer who helped Palmiero, a great grandfather, scanned his passport into the EU settled status app to share the biometric data with the Home Office, the system misinterpreted his birth year as 2019 instead of 1919.

“I immediately noticed that something was wrong because when I scanned in his passport, it imported his biometric data not as 1919 but as 2019. It then skipped the face recognition section which is what it does with under-12s,” said Dimitri Scarlato, who works for Inca – Cgil, an organisation that helps those of Italian descent and an activist with the campaign group, the3million.

He was then asked if to put in the residence details of Palmiero’s parents or if they wanted to proceed independently of them.

“I was surprised. I phoned the Home Office and it took two calls and a half an hour for them to understand it was the app’s fault not mine,” he added.

The Home Office then accepted the mistake and took Palmiero’s identity details over the phone and last Thursday he was told he could resume his application as a 101-year-old.

He was then asked to provide proof of residence for five years in the country even though he has been in the UK for 54 years and the Home Office is supposed to be able to access the national insurance and tax records to corroborate five years of continuous tax residency.

Mr Palmiero came to the UK in 1966 and “worked at a restaurant in Piccadilly and, up until the age of 94, in a fish and chip shop, until 11 o’clock at night”.

He has been married to his 92-year-old wife, Lucia, for 75 years and they have raised four children, have eight grandchildren and 11 great-grandchildren.

His son Assuntino told La Repubblica he was relaxed about the mistake: “We went to the nearby Inca-Cgil office, where Dad and Mum, accompanied by my sister and my wife, made a formal request to stay in the UK. But the request is pending because of dad’s age.

“We’re feeling calm about the situation here and don’t think there’ll be many problems . . . he doesn’t care where he is, either here or in Italy, even though he says every night ‘Let’s go to Decorata [in Italy]“ – and I say: ‘Wait, we’ll go in the summer as it’s too cold right now.’”

A Europhile, he was pleased when the UK entered the common market in 1973 but surprised by the result of the referendum.

“He always hoped that the UK would enter the common market and we were very surprised by [Brexit].

“We have been assured by the consulate that we can always stay – he can’t return to Italy now as he has children and grandchildren here,” he added.

Mr Scarlato told Londra Italia they have subsequently received an apology “for the inconvenience” from the Home Office but still had to wait for the settled status for their father, according to Italian press reports. – Guardian