Fintan O’Toole: The English love of eccentricity has turned sour

Brexit has given us a new species and a strange, new phenomenon – the harmful eccentric 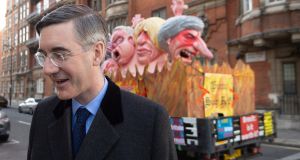 When we outsiders see Boris Johnson stuck on a zip wire with a Union Jack in each hand or Jacob Rees-Mogg bringing his nanny along to canvass voters on his behalf, we are initially indulgent: how delightfully, comically, English. Photograph: EPA

When all of this is done – if indeed it ever is done – a question will puzzle historians. How did absurd characters like Boris Johnson, Jacob Rees-Mogg, and all those lesser swivel-eyes loons you think must have just have wandered into shot but who turn out to be long-serving Tory MPs, come to exert such influence on the fate of nations? They will have to grapple with a strange phenomenon – the way the English love of eccentricity turned sour.

When we outsiders see Johnson stuck on a zip wire with a Union Jack in each hand or Rees-Mogg bringing his nanny along to canvass voters on his behalf, we are initially indulgent: how delightfully, comically, English. But then we remember that Johnson was the single most influential figure in persuading his compatriots to vote to leave the European Union in June 2016 and that Rees-Mogg is the leader of a faction that has brought Britain to the brink of a catastrophic no-deal Brexit.

Self-parodying eccentrics like Johnson and Rees-Mogg, are not just saviours of this endangered Englishness but are embodiments of it

How did this happen? Hemming tellingly linked his search for eccentrics to expressions that would come to shape much of the emotion behind Brexit: “the nanny state”, “cultural globalisation”, “political correctness”, “risk-resistant planning” and, of course, “European standardisation”. His fear was that “English society’s irregularities were being ironed out one by one and with this the eccentric was being fined, imprisoned, or assimilated into everything I understood by the word ‘normal’.”

Wrapped up in this anxiety are two assumptions that helped both to create Brexit and to imply that it is a movement best led by eccentrics. One is that eccentricity is not just a personal oddity – it is an expression of the English national character and therefore a matter of profound political significance. The other is that this national character is under threat. It is being forcibly repressed by a newly homogenised normality. This “ironing out” of the wrinkles of Englishness is happening, not just because of cultural globalisation, but specifically as a result of European regulation.

If you think like this, it makes sense to see Brexit as a reassertion of the true English character, a last-gasp rescuing of its distinctiveness from the incoming tides of Euro-blandness. And thus to see self-parodying eccentrics like Johnson and Rees-Mogg, not just as saviours of this endangered Englishness but as embodiments of it.

Eccentricity was a revolt against the tyranny of conformity. The more it flourished, the more the English could distinguish themselves as a nation of free-thinkers

The idea of eccentricity has a long history as a signifier of English freedom. England’s glorying in eccentrics (actually only those of the male and upper-class variety), so the story went, contrasted favourably with the conformism of slavish continentals and was thus a kind of personal tribute to the virtues of the English constitution.

This idea had more than an element of religious prejudice: Protestants thought for themselves, while Catholics (especially the French) were mindless followers of authority. Eccentricity was the proof of the value England placed on individualism: only in England could you be free to behave in a manner that most of society regarded as odd.

John Stuart Mill, the great theorist of British liberalism, was quite explicit about this. In On Liberty (1859) he wrote that “Precisely because the tyranny of opinion is such as to make eccentricity a reproach, it is desirable, in order to break through that tyranny, that people should be eccentric”. Eccentricity was a revolt against the tyranny of conformity. The more it flourished, the more the English could distinguish themselves as a nation of free-thinkers.

The embrace of the eccentrics is one way of insisting that Britain is not what it actually is: a normal European country

Of course, this was always a myth. In the 1940s, George Orwell evoked a self-image of the English masses that was the opposite of eccentric: “the gentle-mannered, undemonstrative, law-abiding English… the orderly behaviour of English crowds, the lack of pushing and quarrelling, the willingness to form queues”. Perhaps the English valued their eccentrics precisely because they were actually much more obedient and orthodox than they liked to acknowledge.

In any case, upper-class male eccentricity was meant to be free of damage – the invariable modifier of “eccentric” in the English language was “harmless”. And so it was: when your ruling class is running a vast empire and your practical industrialists are leading the world, you can afford a decorative eccentric or two. The eccentric Englishman was a self-conscious indulgence, a way of disguising the relentless reality of global domination. The English liked to see even their empire, not as a ruthless machine, but as an almost accidental side effect of curious gentlemen wandering off the beaten track.

Brexit has a way of reviving habits of mind that no longer conform to reality. The embrace of the eccentrics is one way of insisting that Britain is not what it actually is: a normal European country. Except this time there is a twist, the harmless eccentric has mutated into the harmful kind.