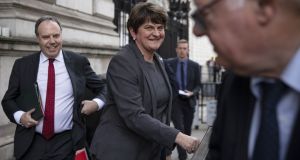 The Democratic Unionist Party (DUP) has rejected proposals for a Northern Ireland-only backstop amid speculation at Westminster that Boris Johnson is considering an all-Ireland solution for the Border after Brexit. The party’s leader Arlene Foster said after a meeting with the British prime minister on Tuesday evening he had reassured her and deputy leader Nigel Dodds that he would not accept a withdrawal deal that included such a measure.

“The prime minister rejected a Northern Ireland-only backstop in a letter to Donald Tusk [European Council president] on August 19th. It is undemocratic and unconstitutional and would place a tariff border between Northern Ireland and the rest of the United Kingdom. That would be unacceptable. During today’s meeting, the prime minister confirmed his rejection of the Northern Ireland-only backstop and his commitment to securing a deal which works for the entire United Kingdom as well as our neighbours in the Republic of Ireland,” Ms Foster said.

Mr Johnson has suggested that there could be an all-island regulatory regime for agri-foods after Brexit, with checks on animals and food moving from Britain to Northern Ireland. But Downing Street said on Tuesday that the government was not considering more comprehensive regulatory alignment between Northern Ireland and the EU after Britain leaves.

Ms Foster said that the DUP wanted Britain to leave the EU with a deal but that any solution for the Border must command the support of both communities in the North.

Speculation at Westminster about a Northern Ireland-only backstop has been fuelled in part by the loss of the Conservatives’ working majority following the expulsion of 21 MPs and the defection of two others last week. But DUP chief whip Jeffrey Donaldson insisted on Tuesday that the DUP remained influential despite the fact that its 10 MPs can no longer provide the Johnson government with a majority.

“The idea that our influence is waning, I think, flies in the face of reality. Our leader will be meeting with Boris Johnson, we are plugged into the discussions about alternative arrangements. We have a significant role to play and, therefore, I would argue that our influence remains,” Mr Donaldson told the BBC.

Mr Johnson on Tuesday defended his decision to prorogue parliament, which remains suspended until October 14th. Visiting a school in London, he said the move was necessary so that his government could outline its legislative programme in a Queen’s speech.

“That’s why parliament is in recess now, because you always have a recess before a Queen’s speech. And anybody who says – this stuff about it being anti-democratic – I mean, donnez-moi un break. What a load of nonsense. We were very, very clear that if people wanted a democratic moment, if they wanted an election, we offered it to the Labour opposition, and mysteriously they decided not to go for it,” he said.