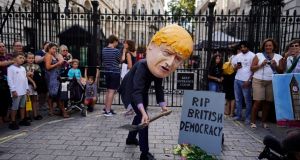 A protester depicting British prime minister Boris Johnson outside the gates of Downing Street on Wednesday. Photograph: Will Oliver/EPA

MPs return to Commons after the summer break. Big question for Boris Johnson’s opponents: do they legislate to stop a no-deal Brexit or move a vote of no confidence to try to topple him?

Parliament suspended – or prorogued – ahead of the Queen’s Speech on October 14. Party conference season starts.

European Council, Brussels. The crucial moment when it becomes clear if Johnson intends to take Britain out of the EU with a deal or no deal.

Johnson promises MPs votes on Brexit strategy. Time is running out for MPs to vote down the government if a no-deal exit is imminent.

MPs could work through the weekend to enact a revamped version of Theresa May’s withdrawal treaty – if Johnson has negotiated a deal in Brussels.

Johnson’s “do or die” Brexit day.

Downing Street is eyeing this date for a possible “the people versus parliament” general election, if MPs succeed in stopping Brexit. – Copyright The Financial Times Limited 2019