Brexit explainer: What is the latest deal on Northern Ireland about? 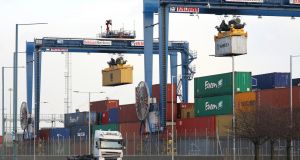 Given that Northern Ireland will abide by EU regulations and the rest of the UK will not, checks of some kind are needed on goods entering Northern Ireland from Britain. Photograph: Peter Morrison/AP

What has been agreed on Northern Ireland? Simon Carswell and Naomi O’Leary examine the detail:

The EU and UK have agreed in principle on the operation of the Northern Ireland protocol, which was part of last January’s Brexit withdrawal agreement - to avoid a hard border on the island of Ireland after the New Year.

So this has nothing to do with a possible trade deal?
Not really. The two sides still have not reached agreement on that.

But will this help secure a trade deal?
Possibly. It certainly improves the mood music. Most importantly, the protocol agreement means the UK has abandoned proposals that threatened to breach international law, that angered the EU side and even many of their own people.

What was the Northern Ireland protocol about again?
It pushes EU- UK checks to the Irish Sea border, avoiding checkpoints on the Irish land border. Under it, NI will follow the EU’s customs rules and “single market” rules. Goods travelling between NI and the Republic will not be checked.

Why didn’t both sides figure this out last January?
It’s complicated. January’s deal, despite Johnson’s claim that the Brexit divorce deal was “oven-ready”, still required considerable work to make it operate in practice.

What is complicated about it?
Given that Northern Ireland will abide by EU regulations and the rest of the UK will not, checks of some kind are needed on goods entering Northern Ireland from Britain.

Tariffs – taxes on goods crossing economic borders – would have to be paid on any EU-bound goods. That is, of course, if the current talks end without a free trade deal.

Under EU food safety rules, meat imports into the EU must be frozen, so this would have wreaked havoc with supply chains between Britain and NI - a danger that caused NI politicians to complain loudly.

Were there other complications?
Yes, political ones. Unionists were deeply unhappy about checks on goods moving between Britain and Northern Ireland, saying that would destroy the UK’s own internal market.

How will the protocol “fix” work?
Big UK supermarket chains will be regarded as “trusted traders”, thus avoiding checks for three months, or so : “British sausages will continue to make their way to Belfast and Ballymena in the new year,” Gove told the Commons.

Will this last forever?
No. There is another grace period, of up to six months to allow UK supermarkets to source NI-bound meat, sausages, etc from the Republic, or elsewhere in the EU.

What about tariffs on goods moving from Britain into Northern Ireland?
Trusted traders will not have to pay tariffs for NI-bound goods. Smaller companies will get tariffs back if they can prove that the goods stayed there, though it is not clear yet how they will prove that.

What about goods heading into Northern Ireland bound for the Republic/EU?
These will face the same controls as anything going to the EU, so that will complicate the lives of hauliers carrying goods on the same lorry to NI and the Republic.

What about documentation on goods moving from Northern Ireland to Britain?
NI firms will not have to submit exit summary declarations. Instead, existing manifests data held by shipping companies will be used. The EU says this will will contain “equivalent information” rather than the “sufficient information” the UK had proposed.

Where will the Irish Sea border checks be carried out?
The ports of Larne, Foyle, Belfast and Warrenpoint.

Will these arrangements last in perpetuity?
No. The trusted trader scheme will run for 3 1/2 years. The EU can apply a brake if it suspects that goods are being smuggled into the EU through NI without checks or tariffs.

Any other issues?
Yes. The EU and UK must agree rules to ensure that British firms with NI interests do not abuse state aid rules.

Does this deal mean the EU will have an Northern Ireland office?
Bizarrely, no. The idea of that was toxic for the British side, so “hotdesking” will be the order of the day for 15 EU officials: “There will be no Belfast mini-embassy or mission, as some in the EU originally sought,” said Michael Gove.

Northern Ireland protocol: Unionism shoots itself in the foot