Boris Johnson repeats threat to walk away from EU talks

UK PM expresses his disappointment more progress had not been made 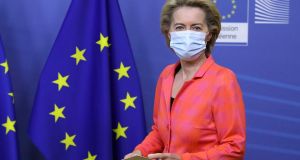 In a call with European Commission president Ursula von der Leyen, above, and European Council president Charles Michel on Wednesday night, Boris Johnson said he would reflect before setting out the UK’s next steps in the light of his statement of September 7th. Photograph: AP

Boris Johnson has reaffirmed his threat to walk away from talks with the European Union this week if the two sides are not closing in on a free trade agreement.

In a call with European Commission president Ursula von der Leyen and European Council president Charles Michel on Wednesday night, Mr Johnson expressed disappointment at the progress of the talks.

“The leaders discussed the latest state of play of the negotiations on our future relationship with the EU, ahead of the October European Council,” a Downing Street spokesperson said.

“The prime minister noted the desirability of a deal but expressed his disappointment that more progress had not been made over the past two weeks. The prime minister said that he looked forward to hearing the outcome of the European Council and would reflect before setting out the UK’s next steps in the light of his statement of September 7th.”

Last month, Mr Johnson set a deadline of October 15th for the negotiations, threatening to walk away from the talks if a deal was not in sight.

“If we can’t agree by then, then I do not see that there will be a free trade agreement between us, and we should both accept that and move on,” he said.

“We will then have a trading arrangement with the EU like Australia’s. I want to be absolutely clear that, as we have said right from the start, that would be a good outcome for the UK. As a government we are preparing, at our borders and at our ports, to be ready for it.”

British negotiators are impatient with the EU’s refusal to begin work on a consolidated legal text of an agreement and eager to enter the most intensive phase of negotiations, known as the tunnel. The EU will not agree to enter the tunnel until there is broad agreement between the two sides on the landing zone for an agreement.

Both sides report progress this week on relatively peripheral issues but insufficient movement on the biggest remaining obstacles to a deal, state aid and fisheries.

“Some progress has been made this week, primarily in technical areas of the negotiations, but there are still differences with fisheries being the starkest. We need to get the substance settled and not having a common text to work from has made progress doubly difficult,” Mr Johnson’s official spokesman said.

“The prime minister’s September 7th statement was very clear about the significance of October 15th. He will need to take a decision on next steps following the European Council in the light of his conversation with President von der Leyen, and on advice from his negotiating team. I cannot prejudge what that decision will be.”

The EU has told Britain it must remove from the Internal Market Bill, which is about to be considered by the House of Lords, clauses which would allow British ministers to override the withdrawal agreement and to decide unilaterally how to implement the Northern Ireland protocol. Justice secretary Robert Buckland defended the legislation on Wednesday, telling the Lords constitutional committee that the government hoped not to use the treaty-breaking measures.

“These provisions will not be used unless we are in a position of breakdown in the relationship between ourselves and the EU, a breakdown that is the result of a failure by the joint committee,” he said.

“What we have done is to be upfront about the potential problem that might occur at the end of the year and rather than confessing and avoiding the situation and pretending that all was going to be well.”