The charity Oxfam has issued a report highlighting the increasing divide between the world's poorest and richest people. Video: Reuters 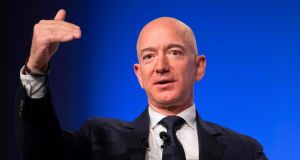 Billionaires watched their fortunes increase by nearly $2.5 billion (€2.2 billion) per day last year, as the wealth of the world’s poorest dwindled by 11 per cent, according to an Oxfam report.

The world’s 26 richest people now hold the same wealth as the poorest half of the global population, down from 43 in 2017, the charity said.

Key recommendations from the report include delivery of universal free healthcare, an end to “under-taxation” and more policies to support women and end gender inequality.

Forcing the wealthiest 1 per cent to pay an extra 0.5% tax would raise an estimated $418 billion (€367 billion) per year to achieve the aims, Oxfam said.

The report has been criticised by the Institute of Economic Affairs (IoEA), a right-wing think tank, which said the findings “misrepresent poverty” and Oxfam is “obsessed with the rich”.

Oxfam’s director of campaigns and policy, Matthew Spencer, said: “The massive fall in the number of people living in extreme poverty is one of the greatest achievements of the past quarter of a century, but rising inequality is jeopardising further progress.

“The way our economies are organised means wealth is increasingly and unfairly concentrated among a privileged few while millions of people are barely subsisting.

“Women are dying for lack of decent maternity care and children are being denied an education that could be their route out of poverty.

“No one should be condemned to an earlier grave or a life of illiteracy simply because they were born poor.

“It doesn’t have to be this way – there is enough wealth in the world to provide everyone with a fair chance in life.

“Governments should act to ensure that taxes raised from wealth and businesses paying their fair share are used to fund free, good-quality public services that can save and transform people’s lives.”

Oxfam said many governments are “exacerbating” inequality through a lack of investment in public services.

The report said an estimated 10,000 people die every day because of a lack of healthcare, while 262 million of the world’s children cannot attend school.

Failing to tackle the problems now will make it impossible to achieve the UN’s goal of ending extreme poverty, measured as living on less than $1.25 US dollars (€1.10) per day, by 2030, according to Oxfam.

It calls for measures to tackle the estimated 16.4 billion hours of unpaid care work carried out globally every day, mostly by women in poverty.

The report warns: “Governments face a stark choice today — a choice between a life of dignity for all their citizens or continued extreme wealth for a tiny few.”

Describing billionaires as having “more wealth than ever before”, it said the world’s richest man, Amazon founder Jeff Bezos, could fund the health budget of Ethiopia with just 1 per cent of his estimated $112 billion (€98 billion) fortune.

It also said the poorest 10 per cent of people in Britain now pay a higher proportion of their incomes in tax than the richest 10 per cent.

She added: “Capitalism has the best track record for lifting people out of poverty. The past few decades alone have seen hundreds of millions of people benefit.

“Demonising capitalism might be a fashionable activity for the affluent but it would be a travesty, especially for the poor, if calls to overthrow it were allowed to succeed.”– PA