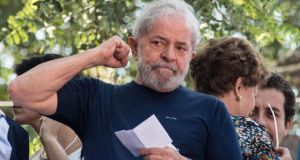 A Brazilian federal judge has ordered the immediate release of former president Luiz Inácio Lula da Silva after the country’s supreme court paved the way for the move with a controversial ruling.

Supporters of the jailed leader were gathered at the police building in the southern city of Curitiba in expectation of him emerging from the building where he has been held since his detention in April of last year.

The judge’s decision followed a highly polarised and politicised supreme court debate on Thursday night in which the court reversed its own jurisprudence and ruled people convicted of crimes should only start serving their sentence after they had exhausted the appeal process.

The six-to-five decision overturned the court’s own 2016 ruling that sentences could start after convicted criminals lose their first appeal.

An estimated 5,000 people could now be in line for release from prison as a result. The most high-profile of them is Lula who was incarcerated after his appeal against a conviction in a bribery case failed.

A leader for Lula’s Workers Party in congress said the for former president would now attend the inauguration of Argentina’s president-elect Alberto Fernández on December 10th in Buenos Aires. Mr Fernández supported the campaign for Lula’s freedom, sparking a diplomatic spat with his Brazil’s far-right president Jair Bolsonaro, who has refused to congratulate him on his victory and says he will not attend the inauguration.

Brazil’s first working class president, Lula has been convicted in two corruption trials and faces several more cases relating to the discovery of multiple massive kickback schemes that operated during his eight years in office which ended in 2010.

Thursday’s ruling is the latest blow for the country’s increasingly beleaguered anti-corruption investigations which had suffered a series of recent reversals in the country’s top court. Its latest decision was interpreted by many jurists as a boon to corrupt politicians and white-collar criminals who have the financial and legal means to tie up cases in the country’s sclerotic higher courts for years or even decades while they remain at liberty.

But others said the ruling restores the intent of the 1988 constitution which gave sweeping rights to defendants in the aftermath of the country’s repressive 21-year dictatorship, which ended in 1985.

Explaining his decisive vote the court’s president Dias Toffoli said it was up to congress to change the law to allow for the swifter execution of sentences.

Following the supreme court decision the chairwoman of the Brazilian senate’s justice committee said she would table a constitutional amendment at its next session that would enable the carrying out of sentences after they had been confirmed on first appeal. But with many members of congress facing investigations or charges for a wide range of crimes such a proposal is likely to face stiff resistance.