Parliamentary session boycotted by Morales’ loyalists claiming it would be illegitimate 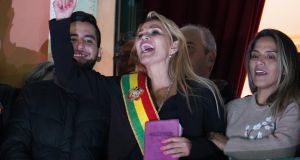 The head of Bolivia’s senate, Jeanine Anez, took office as interim president on Tuesday as former leader Evo Morales pledged to keep up his political fight from exile in Mexico after resigning in what he has alleged was a coup.

Ms Anez (52) assumed leadership before other lawmakers in Congress, invoking a constitutional clause that dictates that she would be next in line to rule after Mr Morales and his vice president, Alvaro Garcia, resigned on Sunday.

A parliamentary session scheduled to formally appoint her was boycotted by lawmakers from Mr Morales’ leftist MAS party, who said it would be illegitimate.

“Before the definitive absence of the president and vice president ... as the president of the Chamber of Senators, I immediately assume the presidency as foreseen in the constitutional order,” Ms Anez, a right-wing opponent of Morales, said to applause from opposition lawmakers.

It was unclear if the move would quell unrest in the highland capital, La Paz, and other cities unleashed by Mr Morales’ disputed bid for a fourth term. Video footage on Tuesday showed police battling supporters of Mr Morales in the city of Cochabamba and masked protesters calling for civil war.

A senator with Morales’ party called for protests starting on Tuesday until he returns to finish his mandate in January.

In Washington, a senior Trump administration official said: “Morales’ departure is indeed a positive step to begin calming the situation on the ground in Bolivia. ”

The official said Mexico had notified the United States of its intention to offer Mr Morales asylum and Washington had offered to help with logistics as necessary.

Mexican foreign minister Marcel Ebrard earlier said Mexico had not discussed the question of asylum with the United States.

The United States on Tuesday ordered family members of US government employees to leave Bolivia due to the unrest, and warned American citizens against travelling there, the US State Department said.

Mr Morales’ resignation came after the Organisation of American States (OAS) declared there were serious irregularities during the October 20th election, prompting political allies to quit and the army to urge him to step down.

Mr Morales, the longest-serving leader among a wave of Latin American leftists who dominated the region in the early years of the century, resigned after weeks of protests over the disputed election and pressure from security forces on Sunday.

Mr Morales called Ms Anez’s move to replace him part of “the most cunning and disastrous coup in history.” Earlier on Tuesday, he thanked Mexico for saving his life as he arrived to take up asylum, repeating his accusation that his rivals had ousted him in a coup.

The former president was then whisked away in a military helicopter, television footage showed. Mexican officials have not said where he will stay, citing security concerns.

Earlier on Tuesday, Ms Anez called for Bolivians to come together but fell short of promising protection for MAS lawmakers who have asked for safety guarantees.

“We are emerging from one of the darkest episodes of our democratic history,” said Ms Anez. “To those who have caused damage or committed any crime: God and justice will judge you.”

More than 30 election officials have been arrested following Mr Morales’ resignation, according to the office of Bolivia’s attorney general.

Residents of La Paz said they hoped politicians would finally restore order to the city, which has been rocked since the election by protests and looting.

“Democracy has been at risk and hopefully it will be resolved today,” said resident Isabel Nadia.

The country’s biggest federation of labour unions has threatened an indefinite strike if politicians and civic leaders fail to restore order, and the Catholic Church has called for peace and safety guarantees for lawmakers.

Mr Morales arrived in Mexico after taking off from the central Bolivian town of Chimore, a stronghold of his supporters where the country’s first indigenous president retreated as his 14-year rule imploded. The journey was far from simple.

Takeoff was delayed, with supporters surrounding the airport. Then the plane was denied permission to fuel in Peru, Ebrard said, so it diverted to Paraguay, a stop he said Argentine President-elect Alberto Fernandez helped arrange.

Ebrard had earlier tweeted a photo of Morales alone in the jet with a downcast expression, displaying Mexico’s red, white and green flag across his lap.

At the Organisation of American States in Washington on Tuesday, a group of 15 countries including Brazil, the United States and Canada, called for new elections and an end to violence.

“Yes, there was a coup d’etat in Bolivia: It occurred on October 20th, when electoral fraud was committed that resulted in the victory of the ex-president Evo Morales in the first round,” said Luis Almagro, the OAS secretary general.

Mr Morales, a charismatic 60-year-old former coca leaf farmer, was beloved by the poor when he won power in 2006. He achieved steady economic growth in one of the region’s poorest nations and was hugely popular for many years.

But he angered many Bolivians by insisting on seeking a fourth term. He defied term limits and aroused accusations of autocracy when he won a legal challenge to a 2016 referendum in which Bolivians voted against allowing him to run again.

His departure has added to a wave of unrest around Latin America, including in nearby Ecuador and Chile, where protesters have been berating leaders over social inequalities.

Paraguayan president Mario Abdo said on Tuesday his country had also been willing to grant political asylum to Morales, although he disagreed with accusations of a coup.

“If he resigned, it is not a coup. He resigned,” he said.