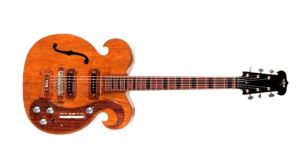 A custom-made electric guitar played by the late John Lennon and George Harrison of the Beatles sold at a New York auction yesterday for $408,000 (€318,000), said officials with the company behind the event.

The semi-hollow-body guitar, manufactured by the VOX company, was sold to an unidentified US buyer at the “Music Icons” event organized by Beverly Hills, California-based Julien’s Auctions and held at the Hard Rock Cafe in Manhattan.

Julien’s said previously it expected the guitar, which was the centerpiece of Saturday’s sale, to fetch between $200,000 and $300,000.

Harrison played the instrument, distinguished by two symmetrical flared shoulders on the upper body, while practicing “I Am The Walrus,” and Lennon used it in a video session for the song “Hello, Goodbye,” according to a statement from Julien’s Auctions.

Both songs were on the Beatles’ 1967 album “Magical Mystery Tour.”

The VOX guitar was a prototype instrument custom-built for Lennon in 1966, said Martin Nolan, executive director of Julien’s. Lennon gave the VOX guitar as a gift in 1967 to Yanni “Magic Alex” Mardas, who was the electronics engineer for the band’s Apple Records label, the auction house said.

The instrument, displayed in recent weeks at a museum in Ireland before the sale, was sold a few years ago by Christie’s Auction House for a little over $100,000. Mr Nolan said the latest buyer, who sent a representative to yesterday’s auction to bid on his behalf, wished to remain anonymous.

Lennon was shot to death in New York in 1980 by a deranged fan, and Harrison died of lung cancer in Los Angeles in 2001. The surviving members of the Beatles are Paul McCartney and Ringo Starr.