Video viewed hundreds of millions of times, eliciting shock, scorn and many questions

A heated quarrel between a bus driver and a passenger was to blame for the tragic crash which killed more than a dozen people in southwest China's Chongqing Municipality on Oct. 28. 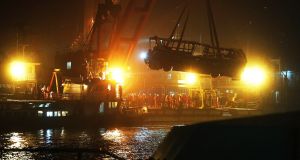 A bus is lifted out of the Yangtze River by a floating crane in Wanzhou in southwestern China’s Chongqing Municipality. Police said on Friday that a brawl between a passenger and a bus driver was the cause of the bus plunging off a bridge and killing at least 13 people on Sunday. Photograph: Wang Quanchao/Xinhua/AP 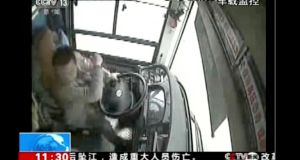 A bus driver strikes a passenger moments before the bus plunged off a bridge into the Yangtze River in Wanzhou in southwestern China’s Chongqing Municipality last Sunday. Photograph: CCTV via AP Video

In their final moments, the passengers screamed. A woman stood at the front of the bus, slapping the driver with a mobile phone. The driver hit back, losing control of the bus and sending it plunging nearly 200 feet into the Yangtze River in southwestern China.

The fight was the talk of China on Friday, as the police released a video, recovered from the wreckage, showing the moments before the crash, which occurred on Sunday in the city of Chongqing and killed at least 13 people. The video was viewed hundreds of millions of times, eliciting shock, scorn and questions about whether there was too much vitriol in society.

“Maybe there’s too much negative energy,” Wang Chenshuang (30), a resident of Chongqing who works in the education industry, said by telephone.

In a few seconds, a whole bus of life is lost... The price of acting on impulse is too grave

Two people who were on the bus are still missing, and no survivors have been found, police said. Authorities said the woman, surnamed Liu, began hitting the driver, surnamed Ran, after she missed her stop and he refused to let her off.

Much of the fury on Friday played out online, where internet users said they were outraged that Liu and Ran would allow a petty fight to endanger the lives of so many people. They called on the government to do more to protect bus drivers.

“In a few seconds, a whole bus of life is lost,” wrote one commenter on Weibo, a microblogging site. “The price of acting on impulse is too grave.”

Zheng Chuankai, a lawyer with Anli Partners in Beijing, said the incident underscored the need to maintain strict laws to punish those who endanger public safety. “This case is very typical and very vicious,” he said.

Previously, state media outlets had blamed a female driver for the crash, whose car collided with the bus before it plunged into the river. Those reports unleashed sexist rants against female drivers online. But police on Friday made it clear that it was the fight that had caused the crash, blaming in a statement the “mutual fist-fighting behaviour” of Liu and Ran.

“Fifteen fresh lives have vanished, and the lessons are extremely painful,” the statement said. “May the dead rest in peace, and the living be warned.”

An online commentary by People’s Daily, the main newspaper of the Chinese government, described the dispute as “pointless”. “We have to ask, why do fistfights between passengers and drivers keep happening?” the commentary said. “Take to heart the lessons painfully learned, and don’t stop at sobbing. And don’t stop at anger. There is no redemption without thorough reflection.” – New York Times