Twenty passengers are safely rescued after being stuck for two hours on the Arkham Asylum Roller Coaster at Australia's Movie World. Video: Reuters 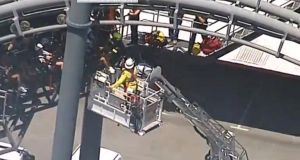 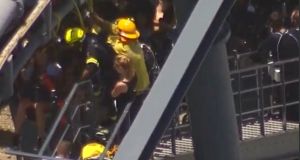 More than twenty people were trapped for almost two hours at the top of the roller coaster ride in Australia. Photograph: Reuters 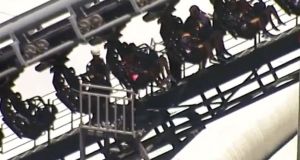 Twenty people were trapped for almost two hours at the top of a roller coaster ride at a theme park on Australia’s Gold Coast on Wednesday, said emergency services, only a few months after an accident on a neighbouring theme park ride killed four people.

Those trapped on the Arkham Asylum Coaster ride were seated in chairs suspended from the ride. Most were easily rescued, but four could only be reached by emergency personnel using a ladder platform, according to a spokeswoman for Queensland Fire and Emergency Services.

No one was injured.

Four people were killed on a river rapids ride at Dreamworld, ranking it among the world’s deadliest theme park accidents.

Village Roadshow shares were trading 2.5 per cent lower on Wednesday, while the overall market was trading 0.4 per cent higher.

Village Roadshow in November said it had experienced “inconsistent trading” at its Gold Coast theme parks in Queensland state in the wake of the Dreamworld accident.